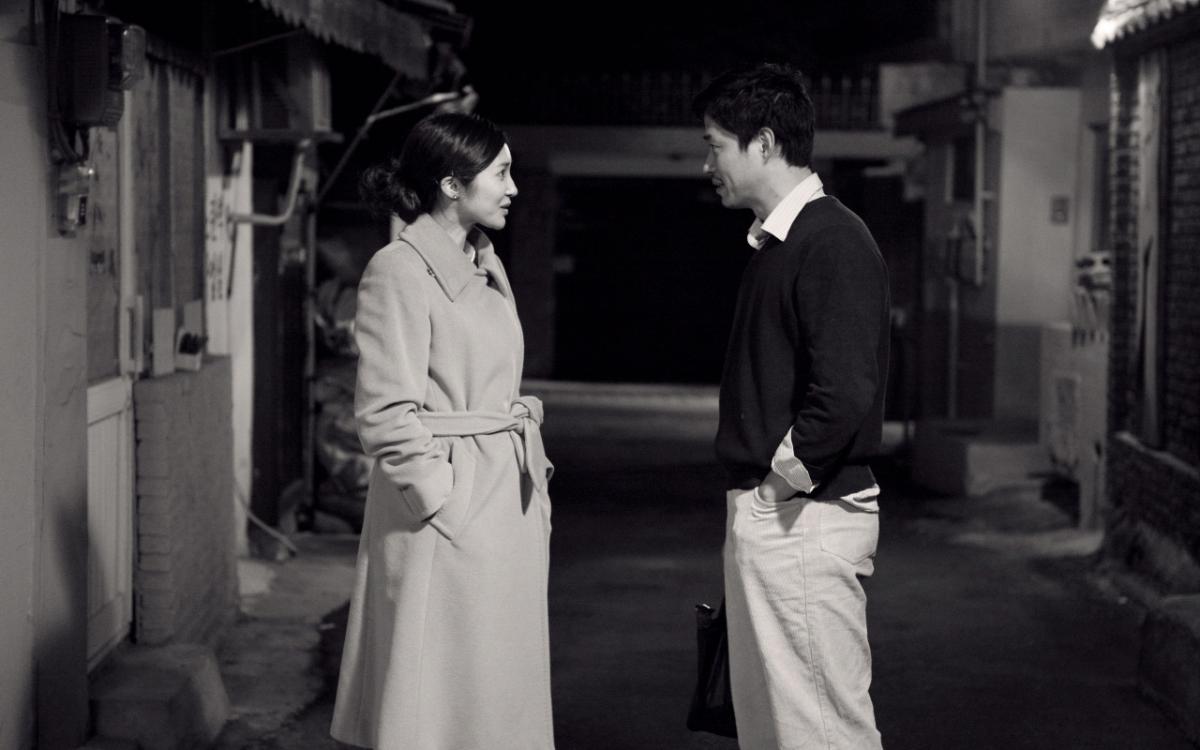 Near the end of Alain Resnais’ masterpiece Muriel, a man sings a music hall chanson about time and memory that mournfully repeats the word déjà to emphasize the rue of those who “fear the future, regret the past.” He could be describing Hong Sang-soo’s aimless characters – “I have nowhere to go,” Seongjun says at the outset of The Day He Arrives – trapped in the past, their prospects tentative save for one sad certainty: routine will become the eternal return. Unlike the twice-told tales of Hong’s early career, in which his films’ second halves reiterate their first, revisiting sites and incidents to revise their meaning, Hong’s recent works, including his latest, In Another Country, often repeat episodes more than twice – literally, déjà vu all over again – varying the version of events to cast doubt on their veracity or to offer cubist scrutiny of his complicated characters. In The Day He Arrives, a soju-fueled cross between Last Year at Marienbad and Groundhog Day, Yoo Seongjun, a lapsed director self-exiled to the provinces, roams the streets and bars of Seoul much as X wanders the hallways and gardens of Marienbad, through an endless repetition of settings, characters, and incidents, each reiteration calling previous accounts into question. “I don’t remember a thing,” the bar owner Ye-jeon insists after Seongjun apologizes for what something he has just done, her protestation recalling A’s many disavowals of the past in Marienbad. Whose version does one trust: his, hers, neither?

The affinity between Hong’s comedies of social discomfort and Resnais’ and Robbe-Grillet’s glacial metafictions may appear far-fetched; the Korean’s wintry city in which pissed-up disputes and wounding faux pas proliferate, seems a universe away from the rococo architecture, formal gardens, and elegant aristocrats of the Frenchmen’s summertime château. However, like Robbe-Grillet’s obviously autobiographical work – “I have never spoken of anything but myself,” he writes in Ghosts in the Mirror: A Romanesque – Hong’s cinema has increasingly relied upon narrative game playing and fragmentation, the use of doubles and look-alikes (here, the same actress playing the passive-aggressive ex-girlfriend Kyung-jin and her mirror image opposite, the sweetly flustered Ye-jeon), anachronism and jumbled chronology, unreliable narration and compulsive repetition, all cardinal elements of Robbe-Grillet’s films and novels. Indeed, one wonders if Novel, the bar to which Seongjun repeatedly returns, is one of Hong’s sly jokes – he knows English, admires French culture, and loves word play – in that its name denotes both ‘new’ and ‘book,’ as in Robbe-Grillet’s nouveau roman. The Day He Arrives, shot in black-and-white, though its online trailer is in color (and in reverse action!), stresses temporality in its present-tense title, then deranges it through repetition and continuity-defying ruse (e.g., copious snow falls and too quickly disappears). Seongjun’s past keeps impinging upon the present: he encounters an actress, a leading man, a producer, a fan, a former student, all of them unwanted reminders of his previous life. Seongjun tells himself at the outset that he will pass quietly and quickly through Seoul, and informs people that he is in the city for only three or four days, but the film’s ambiguous chronology leaves him in a state of suspension, ensnared in Hong’s looping recurrences. (Muriel’s time-trapped characters keep announcing their imminent departure from Boulogne, then find reasons to defer.)

Hong’s feckless men are forever doing the wrong thing: insisting upon paying a host for a home-cooked meal or crying out the name of another woman in the middle of sex. Seongjun, another of Hong’s ineffectual or ‘blocked’ alter egos – his films sometimes slip from self-reproof into auto-excoriation – initially seems more solicitous of women than previous incarnations, but his empathy begins to resemble mere sententiousness. “Be strong,” he tells his ex-girlfriend after an abject bout of crying and the usual drunken fumble that passes for affection in Hong. “Be easy on yourself, just take it one day at a time,” he counsels the actress, palpably anxious to elude her. “Just take in these marvels of life,” he advises her on their third encounter (“You again!”). “I want you to be happy… I want to make you happy,” he tells the bar owner after sex, then promptly abandons her. In Hong’s cinema, sluices of booze escalate conversation into confession and often into combat. (Hong has suggested that he gets his actors sloshed for the shoot, all the better to authenticate their inebriation.)  “It is difficult to be human,” someone says early in Hong’s Turning Gate, “but let’s try not to become monsters, okay?” The smashed and volatile Seongjun suddenly slips from one to the other, inviting three film students for drinks, buying them fruit like a kindly father, and then exploding in drunken, irrational rage: “Fuck! Stop copying me!” he screams as he staggers into the night.

One of the most cinephilic, prolific, and thematically consistent Asian directors to emerge in recent decades, Hong leaves a trail of auteurist markers in his characteristically wry and melancholic The Day He Arrives: the many references to the cold (indicating his taste for winter or inclement weather); Ozu-like shots of street posts and restaurant signs (and that enigmatic interjection of the net overhanging a batting range, almost a ‘pillow shot’); a dog (here gone missing); and the promiscuous use of the shot long abjured by most modernist directors, the zoom. Increasingly employed since its advent in Hong’s Tale of Cinema, the zoom appears at least two dozen times in The Day He Arrives, sometimes restrained for purposes of reframing but more often not: jerky, diffident, and, when wedded with a pan, bluntly emphatic. Odd as it may seem, Hong’s inspiration for reviving this cheesy device might be none other than the ultra-subtle Eric Rohmer, who has often been cited as the Korean director’s formative influence. Rohmer’s slow, discreet zooms delicately pinion his characters within the frame, prodding them to disclose their inner beings, which they falteringly, sometimes fatuously do. (See, in particular, Le rayon vert.) Hong turns his frames into traps, employing his static shots, long takes, and zooms to lock his similarly garrulous and self-deluding creatures in the inescapable image, intensifying their physical unease and social awkwardness with his relentless inspection. (When Boram and Youngho cross the road in the cab hailing sequence, their departure from the frame registers as escape from a pressure zone.) At film’s outset, Seongjun chafes under the anxious attentions of the actress, his evident desire to bolt emphasized by Hong’s immobilizing frame. At film’s end, Seongjun is once again captive, scrutinized by not one but two cameras. He has arrived, but isn’t going anywhere.

Originally published in 2013, in the booklet that accompanied Cinema Guild’s DVD of The Day He Arrives. 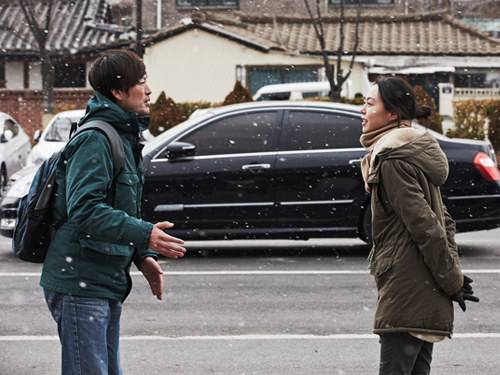 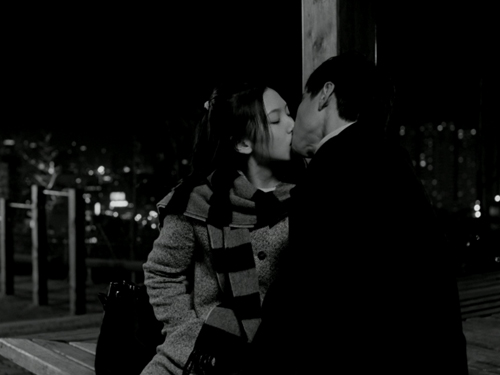 “Reiteration becomes reversal in Virgin Stripped Bare by Her Bachelors (2000), the most complicated instance of Hong’s doubling. 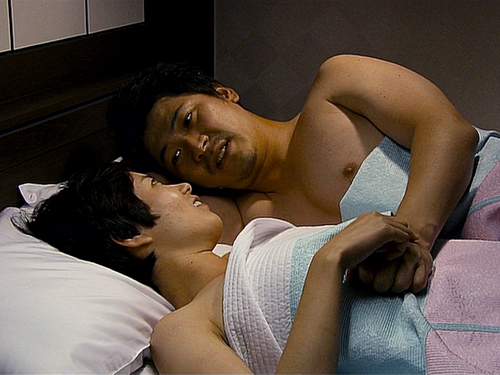