Jean-Guihen Queyras: So I wrote this C minor in the middle of this first bar. Technically, nothing tells us it’s C minor on the downbeat already…. So where to write the C minor? I, personally, play it from the downbeat. But it’s true that it’s interpretation.

Anne Teresa De Keersmaeker: It’s movement, no? How do you measure the intensity towards the change? 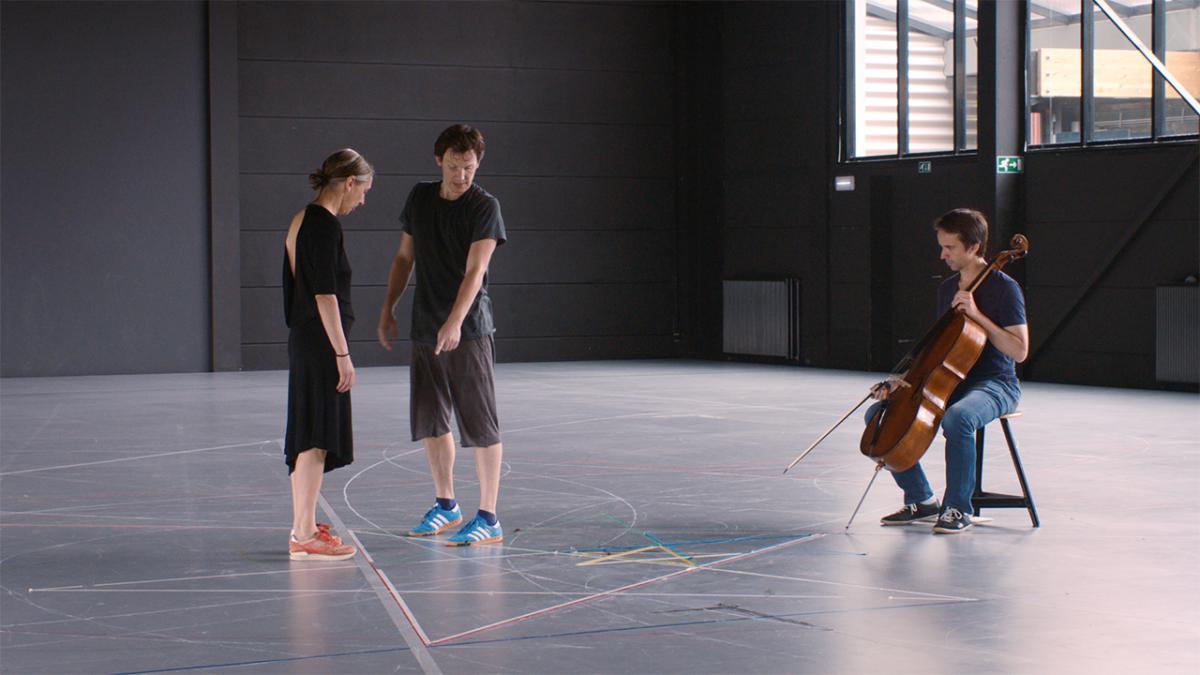 The first scene opens onto a large empty dance studio, in the middle of which we can see a single stool. At the back, on the other side of a bay window, large trees are moving, twisting in the wind. On the floor, we can discern coloured curves drawn on the dance mat. Empty space, conducive to all projections: the silence of the set filled by the muffled sound of the wind, the evenness of the stage and the large masses of plants rocking irregularly. Two men enter. One of them is carrying a cello. He takes a seat and starts playing Bach’s first cello suite. By his side, the other man slowly starts to move – he sways slowly and we don’t know if he is moving to the rhythm of the bow or of the trees.

“Is that Johann Sebastian Bach, daddy?” My five-year-old daughter asks me when she sees the man start playing the cello.

“No, he's been dead for a long time, in fact. He lived a very long time ago. That is Jean-Guihen Queyras. He's a cellist.”

“He read the score that Bach wrote.”

From a drawer, I pull out the volume of cello suites and I open it up before us.

“Here you go. These are the cello suites by Bach. When Jean-Guihen Queyras wants to play a suite, he reads this score. It has the notes for him to read as well as the tempo, the speed at which he should play, whether he should play loudly or softly.”

She studies the lines and the dots dancing on the page intensely.

“That's normal. Being able to decipher a score is like being able to read a book, you need to learn.”

“And what about Anne Teresa, does she know how to read music?”

Close up. Jean-Guihen Queyras, at the table, pencil in hand, explains the composition to the dancer Marie Goudot and the choreographer Anne Teresa De Keersmaeker. He talks about cadences, tempos, keys – A minor, F major. They all have their copies open in front of them, with notes, colours, marks scribbled all over. The score becomes a playing field, a shared work space, open to everyone’s interpretation – and no longer just a specialist’s document. The network of notes forms a labyrinth. Jean-Guihen Queyras, in the role of Ariadne, unrolls the thread and shows the ways.

“Yes, she knows how to read music. Take a look. They’ve each got the score. They’re reading together, trying to understand how it's composed so that they can dance it...”

“OK. But then, is the dance written in words or in notes?”

I didn't know exactly how to answer my daughter’s question. I told her: “You know, I’ve worked a lot with choreographers, but I still don’t know exactly how the dance is created. Some need to dance themselves to create movement; others do it all in their heads, like a drawing you think up before putting it on paper. For others, it's like a language written in symbols... For Anne Teresa, I think it’s a little of everything all together... It starts with the notes, moves through her body, is redeployed in geometric figures, and finally settles into the bodies of the dancers. That’s what this film talks about ultimately: how dance is born from music, is shared, practised, written, repeated, annotated, crossed out, then restarted, until the music and the dance talk together... converse... respond...”

The film Mitten, which shows us what goes on behind the scenes in the creation of Mitten wir im Leben Sind/Bach6CelloSuiten, focuses on this point exactly: how is dance invented? The camera of Olivia Rochette and Gerard-Jan Claes scrutinises how it emerges from a continuous circulation between the notes, the words and the gestures. Each scene, alternating between sessions at the table and rehearsals of dance sequences, redistributes the evolving places of these different symbolic arrangements. We see the stops, the retakes, the discussions: about a note, a rhythm, a trajectory. In this constantly adjusting dynamic, the least element is scrutinised, put back in the work: the key or cadence of a measure and the placing of a foot or the intensity of the movement of a hand. Through the accumulation of details, the film continues like needlework where each point, each word, each thread plays a role in the weaving of the overall image of the choreography that is taking shape.

This is how Mitten exposes not what the piece is looking to erase or to hide but rather what, once finished, it succeeds in restoring: work, sliding, deletions, the on-going dialogue between the score, the instrument and the bodies. As such, it is not so much a “making of,” but rather an enlargement of the focal, as the camera succeeded in showing both sides of the tapestry at the same time: back and front, the design completed and the jumble of threads and knots that holds it together. Between the script and the bodies, the film also conjures up an indispensable element: the voices. Not that they would be missing in the piece and that the latter would need a voice-over to disclose its secrets. The voices we hear throughout the creation process have a status that is at once more ambiguous and more carnal than a single explanatory level. It’s the voices that sing, that croon, that comment, alternating continuously between French and English, English and French or Flemish, return to marking the tempo or to the melody. Alternating between languages, characteristic of an utterance by Anne Teresa De Keersmaeker who, in a single sentence, can glide effortlessly from French to Flemish or German to English, suggests something of the transition from one language to another (language of music, articulated language, body language) and of the effort of translating that characterises Bach6CelloSuiten, a piece created in close collaboration with Jean-Guihen Queyras and the Rosas dancers: Boštjan Antončič, Marie Goudot, Julien Monty and Michaël Pomero. The work passes through their voices, that is, at once the joy of deciphering and the fragile part, nascent, of the work in progress. The film shows us the work on the suites like a Tower of Babel building site, mobilising languages (and their infra-language) – their frictions, their misunderstandings, their points of resonance.

The film is called Mitten and the images effectively stay in the middle, between two states of Bach’s cello suites. Between the score, timeless, and the voices that set it in motion, that have it pass through to the dance piece and its bodies to the present. If the part of the work was already present in the Work/Travail/Arbeid1 exhibit, it is another facet of the work that is brought to the surface here: a less spectacular facet, that doesn't go through sweat, effort or fatigue so much as through a focus on concentration and attention. The editing of Olivia Rochette and Gerard-Jan Claes, realized together with editor Dieter Diependaele, exposes this volatile part, almost invisible: the patient work of reading, its studious aspect, applied. By focusing on the absorbed faces, on the hands that indicate, that write or that erase, on the suspended gestures and the repeated movements, they formulate what we could call a grammar of attention.

In another sequence, a model of that which Mitten extracts from this material being developed, all the project’s participants are seated at the table. Behind them, there stands a blackboard on which are drawn circles, rosettes and distances. Jean-Guihen Queyras holds his cello against himself – like a second body or a second voice, within easy reach. Moving from explanation to demonstration, from the mathematics of the notes to the virtuosity of the fingers, or even doing both these at the same time, he starts to play the bass notes of a sequence to demonstrate its structure. His posture - which could be that of a teacher towering over his students, giving access to the mysteries of Bach's music – is constantly contradicted by the irrepressible pleasure with which he plays these bars of music over and over. He has interpreted them beautifully thousands of times and every time he is amazed by what the notes reveal to him and make him feel. Interpreting another passage while explaining the dialectic between the questions and answers that structure it – the attack starting alternately from above and from below – he is himself carried away by the music: joining the ever-increasing intensity of his fingers on the instrument, there is excitement in his voice, from above / from below, right up to accompanying the crescendo of the chords: below! What the film aims to reveal is this connection between learning, knowledge and pleasure: between a knowledge that is never complete - formulated as a question - and an enjoyment that is revealed in the discovery of this knowledge continuously renewed by the interpretation, the game, the exchange and the transmission. In a judicious balance between an unhurried nature, duration and sudden surges, Mitten shows us the extreme concentration of the work constantly interrupted by moments of pure intensity, where something is finally touched, in the body, through round trips. The (studious) pleasure of learning to read is thus transformed into a singular experience: like moments of epiphany when the gap between the act of learning and the fact of learning is bridged.

With kind permission of Rosas

On the Day of Dance, 27 April 2019, Mitten will have its theatrical release, and will be projected in a large number of cinemas and art centres in Belgium. Afterwards the film will stay on the regular program of Cinema Sphinx (Ghent), Cinema ZED (Leuven) and Cinema Palace (Brussels). You can find all the screening dates on the website of Olivia Rochette and Gerard-Jan Claes. 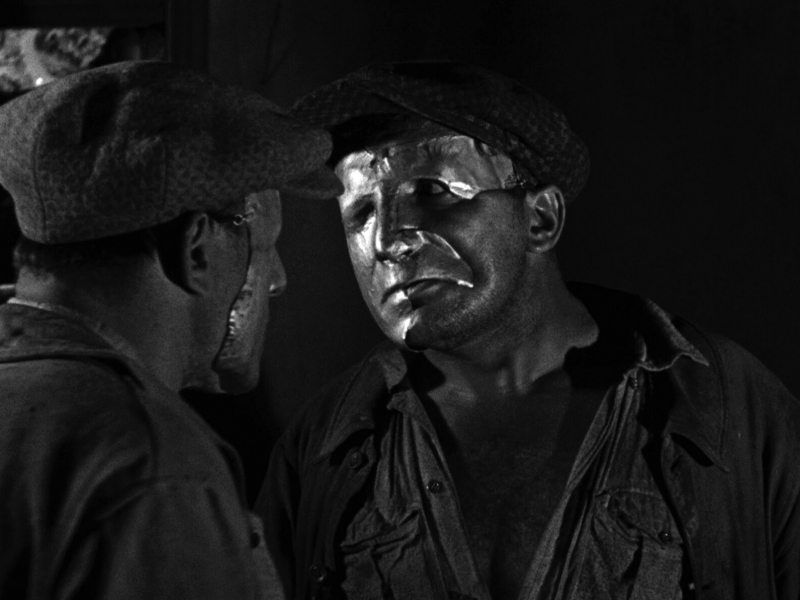 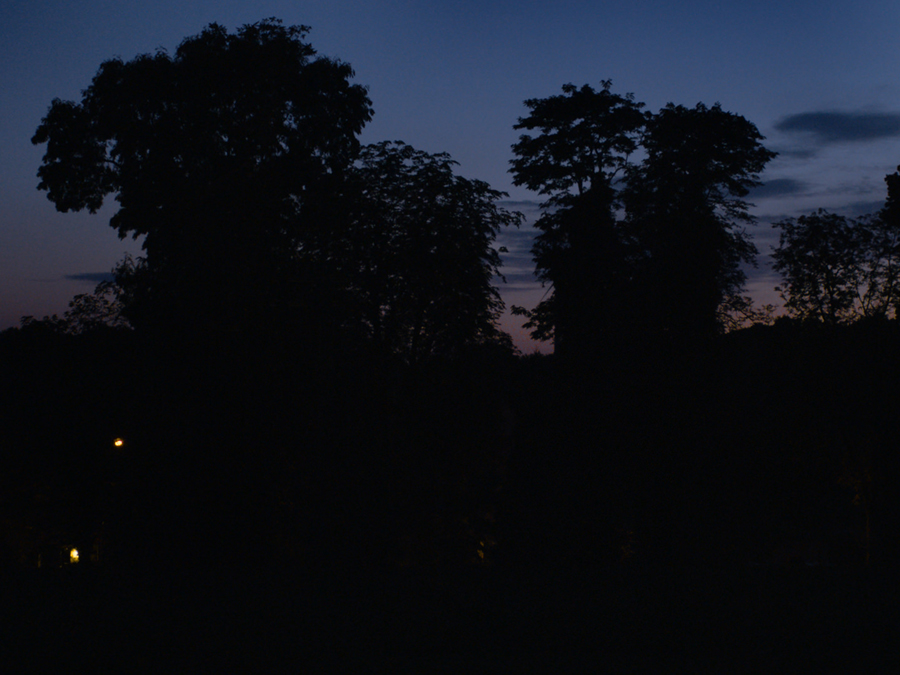 “During the editing process we realised fairly early on that the film is mostly about concentration. Not only human concentration during a working process but also in terms of a propelling dynamic. A creation process of Anne Teresa clearly works towards something, towards a point that is actually unattainable.”