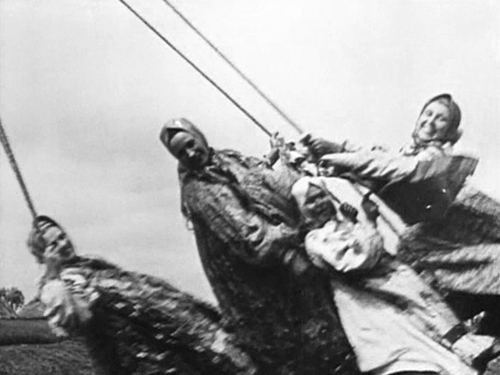 Women of Ryazan compares the fate of two heroines Anna and her lively and energetic sister-in-law Vasilisa, who openly defies the old way of life.

“This was the most important film made by Olga Preobrazhenskaya, a Russian film pioneer and one of the first women in Europe to stand behind a camera. After beginning as a theatre actress, she made her cinema debut in The Keys to Happiness (1913), directed by Vladimir Gardin and Yakov Protazanov, before becoming the first female Russian film director in 1916 when she made Miss Peasant, a film version of the famous short story by Alexander Pushkin. Shot in the village of Sapozhok, which has remained unchanged for three hundred years, The Peasant Women of Ryazan was the first collaboration between herself and Ivan Pravov, but she was definitely the dominant partner in the duo, with her decision to cast debutants Emma Tsesarskaya and Raisa Puzhnaya in the main roles particularly successful. Although this very popular movie touched on rural themes, as was desired by Soviet propaganda, it still found itself criticised for its insufficiently progressive stance; today, this lack of a propaganda load, so characteristic of movies of the time, is to the film’s advantage.”

“The “women problem”, as nineteenth-century Russian intellectuals characterized it, referred to a number of interlocking issues. Feminists clamored for various reforms: suffrage, abortion-on-demand, easily obtainable contraception, free marriage and divorce. These rights were realized in 1917 when Lenin instituted several decrees which nullified the male prerogative. In consequence, the legislation affirmed women’s complete right to self-determination in economic, social and sexual matters. (…) The legislative battle thus ceded, the problem remained as to how opinion and behavior could be shaped to reflect the new political consciousness. (…) Born out of expediency, the political film was infused with a sensibility that motivated experimentation and innovation. (…)

The sensitivity to the peasant's milieu, and the consistent attention to the detail and the color of Ryazan, prevent the film from deteriorating into a simple political tract. Long after viewing it one recalls images of undulating grain fields, of tapestry-like patterns of women washing clothes. Reclaimed by modern audiences, Peasant Women of Ryazan works like the best political films – providing positive, compelling images of a new world.”