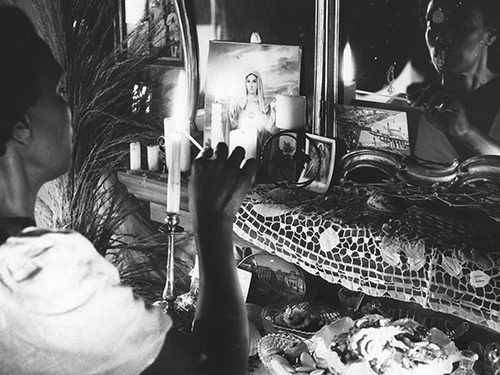 “In Martina Attille’s own words Dreaming Rivers ‘illustrates the spirit of modern families touched by the experience of migration.’ A Sankofa film production, the film evocatively weaves together the ambition-fuelled dreams and memories of Caribbean-born Miss T. and her family. As an allegory of migration, Dreaming Rivers was inspired by several key moments marking the dynamism and activity of the UK’s Black Arts Movement during the 1980s.”

“Filmmaker Martine Attille is a member of the renowned Sankofa film group of black British filmmakers. Through films like Dreaming Rivers (1988), she explores the colonial experiences of Caribbean immigrants in Britain. An impressionistic rendering of a mother’s reflections from her death bed, Dreaming Rivers allows Attille to examine generational effects of migration on Caribbean identity and culture. She directed The Passion of Remembrance in 1986.”

Sankofa is a collective of black, British filmmakers and was founded in the summer of 1983 by then aspiring filmmakers Isaac Julien, Martina Attille, Maureen Blackwood, Nadine Marsh-Edwards, and Robert Crusz. The five young artists were all recent graduates of various art colleges and polytechnics in London and were part of a wave of black independent filmmakers who emerged in the 1980s. Determined to tell their own stories in their own way, they established Sankofa. Sankofa was one of several collectives and film workshops supported by the Greater London Council (abolished in 1986), and the new broadcaster Channel 4, to encourage diversity. Sankofa specializes in distinctive, short films. The Collective’s earlier work includes: Who Killed Colin Roach (d. Isaac Julien, 1983), Territories (d. Julien, 1984) and Passion of Remembrance (d. Maureen Blackwood 1986). The collective’s first full length feature, foregrounds their interest in politics, sexuality and Black British history. Other films such as Dreaming Rivers (d. Martina Attille, 1988) and Looking For Langston (d. Julien, 1989,) uncover personal histories with sensitivity and lyricism. In the late 1990s, their production slate broadened to include stories about British Chinese life (Yellow Fever, d. Raymond Yeung, 1998) and the work of new writers and directors like Toa Stappard (Strip, 1998) and Mina Courtauld (Dusty’s Story, 1998). Among their several award-witting films is ...Is It the Design on the Wrapper (d. Tessa Sheridan, 1997), which was awarded the short film Palme d’Or at the Cannes Film Festival.”