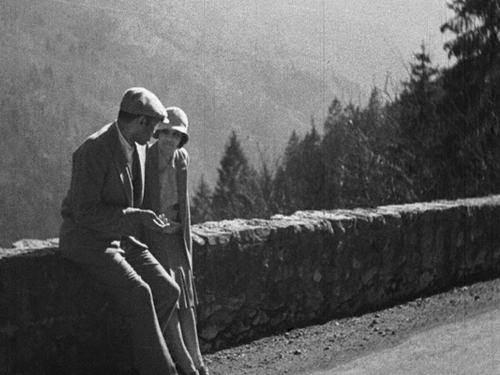 “In a small ‘borderline’ town, anywhere in Europe, Pete, a negro, is working in a cheap hotel café. His wife, Adah, who had left him some time previously, has arrived also in the same town, although neither is aware of the presence of the other. Adah is staying in rooms with the white couple Thorne and Astrid. Thorne is a young man whose life with Astrid has become a torment to them both. Both are highly strung, and their nerves are tense with continuous hostility evoked by Thorne’s vague and destructive cravings. He has been involved in an affair with Adah, and the film opens with the quarrel that ends their relationship.”

The short “libretto” outlining the plot, passed out at initial screenings of the film, a necessary key to the otherwise disjunctive and elliptical narrative.

“The only real avant-garde film.”

“‘From all available evidence, no black man had ever set foot in this tiny Swiss village before I came’.

James Baldwin’s 1953 essay ‘Stranger in the Village’ is a portrait of European provincialism, meandering from one encounter with white ignorance to another. But contrary to his own assumptions, Baldwin was not the first black American to swap the cosmopolitanism of Paris and New York for the rural purgatory of the Swiss Alps. Over two decades earlier and about 60 miles west of Baldwin’s backwater, the village of Territet provided the backdrop for an ambitious and little-known film, Borderline. The film’s cast is an impressive roll call of modernism’s luminaries, including the poet Hilda Doolittle (known as H.D.), her lover and patron Annie Winifred Ellerman (known as Bryher), the singer and actor Paul Robeson, a prominent figure in the Harlem Renaissance, and his wife Eslanda.

[The story’s] tangled web of envy and desire was perhaps inspired in part by H.D. and Bryher’s own relationship and their ménage à trois with the bisexual director of Borderline, Kenneth MacPherson. MacPherson and Bryher had entered into a marriage of convenience in 1927, and both maintained an open relationship with H.D.. Together the trio founded the POOL Group, a production company dedicated to the promotion and distribution of film as an art form. Hugely influenced by the work of directors Sergei Eisenstein and G.W. Pabst, the POOL Group embraced the avant-garde techniques of Soviet and German cinema rather than Hollywood commercialism. The company’s literary journal, Close Up, became a mouthpiece for innovative film art: contributors included Gertrude Stein and Dorothy Richardson.”

Then what is this film about and where does it lead us? Is it about two negroes in a small Continental mid-European town, who cross a back-water of small-town vice and malice and leave it cleansed and hallowed for their passing? No, it is nothing so defined, nothing so logical, nothing of such obvious sociological importance. Then what is this film about? Is it a series of psychological interpretations of white and white, neurotic and super-neurotic, lounge lizard and stalesweet of small-town Messalina? No, there is nothing so logical, nothing so dramatic, nothing so consistent. It is not about any of these things. There is no actual acute moment of crisis in a series of lightning-like ‘flashes’ where each, from the first moment of Astrid’s frenzied entrance to the last beneficence of the giant-negro on the hill-top, is equally a crisis. Film and life are or should be indisseverable terms. In this modern attempt to synchronize thought and action, the inner turmoil and the other, the static physical passivity and the acute psychic activity, there is hardly one moment, one dramatic ‘sentence’ that outweighs another. Kenneth Macpherson has indeed achieved a sort of dynamic picture writing. His camera has recorded his pen and ink sketches with fluidity and precision.”

“The planning for Borderline began in May 1929 when, as Macpherson claimed, ‘Europe was unaware, and so was I, of Eisenstein's now commonly accepted though little understood theory of overtonal montage.’ In the May 1929 issue, Close Up published the first translation of Eisenstein's work, ‘New Language of Cinematography’, an essay which marked the beginning of his speculation on an ‘intellectual cinema’. In March 1930 (the same month that Borderline was shot) Close Up published the first translation of ‘The Fourth Dimension in Kino’, wherein Eisenstein proposed a ‘higher category’ of montage, ‘not of roughly physiological over-tone(s)’ but ‘overtones of an intellectual order’. ‘The intellectual Kino’, Eisenstein wrote, ‘will be the Kino which resolves the conflict-conjunctions of the physiological and intellectual overtones.’ [...] H.D. compares the editing of Borderline to the ‘lightning effect of repeated firing’ in Eisenstein's October (1928). (‘The almost instantaneous effect was Eisenstein's meticulous innovation – the cutting and fitting of minute strips of soldier, gun, gun-fire, soldier, gun.’) In Borderline, when Pete and Adah embrace in the Swiss countryside, the image of Pete is intercut with the flowing rapids of a waterfall to give the effect of Eisensteinian ‘clatter montage’, an effect H.D. writes, ‘almost that of super-imposition but subtly differing from it... achieved by the meticulous cutting of three and four and five inch lengths of film and pasting these tiny strips together.’”