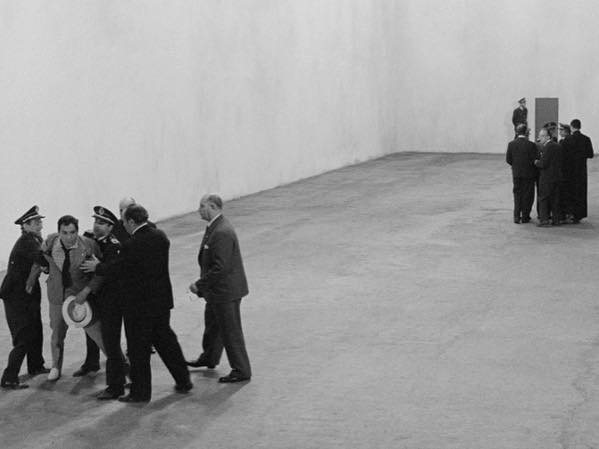 Woman in the book fair: Have you got something about Bergman or Antonioni?

“A young gravedigger meets the daughter of an executioner and falls in love with her. Although love has sprung from their shared connection to death, the gravedigger dreams of emigrating to Germany to complete his training as a mechanic, but a bureaucratic mistake forces him to stay in Spain and take on his father-in-law’s role as executioner. Rafael Azcona and Luis García Berlanga’s script is full of humour, and José Isbert (who plays the executioner) comes across as so likeable that the censors failed to understand the true nature of the film; they only found out it was against the death penalty (in Spain death by garrotte was still in force) when it was shown at the Venice Film Festival and won the FIPRESCI prize. From that moment on, the film encountered difficulties getting screened. El Verdugo is an absolute masterpiece; seen now, it seems inconceivable that it was filmed in 1963. It’s an astonishing plea against the death penalty, disguised as a delightful and funny comedy of manners.”

“Berlanga and Buñuel are the two great masters of Spanish cinema. All of Spanish cinema derives from those two. I think it's a bit unfair that, internationally speaking, Berlanga hasn't been accorded the same status or importance as Buñuel. I've wondered why that is. Because he made lots of real masterpieces. I think Berlanga is less known and less appreciated outside of Spain because his films are gushers of verbiage. All his characters talk a lot and all at the same time, which is common in Spain. So in group shots, those masterful sequence shots, there are usually five or six people speaking. That's impossible to subtitle! El Verdugo is one of his masterpieces. I think it's the best film ever made about the death penalty. Just imagine: it was made in 1963, with Franco's dictatorship in full force [Franco, who was internationally known as ‘the executioner’ at the time, has reportedly declared: ‘Berlanga is not a Communist. He is something much worse: he is a bad Spaniard’].”

“One of the most devastating effective sequences in the history of Spanish cinema occurs near the end of The Executioner. A long take, marked not only by technical dexterity or aesthetic quality but also by its ethics, captures the two groups in its frame – that of the executioner and that of the condemned man – in powerful comic reversal. In a whitewashed courtyard shot in silence, except for the muffled sounds of resistance, we witness the culmination of José Luis’s moral crisis as he is dragged, struggling and vomiting, his desperation palpable, cajoled by officials of state and Church, inexorably towards the scaffold.”

“Here, a few years before his work in spaghetti westerns immortalized the Spanish landscape, cinematographer Tonino Delli Colli’s contribution is felt most in cramped interiors, where his camera cranes its neck around obstructive corners, nosing into confined spaces and catching action through doorways and down halls. Since the film is always as interested in what surrounds the hero as it is in the protagonist himself, this prying, restless movement, constantly shifting our attention and making us aware of those overhearing, spying, or discussing events the plot focuses on, becomes a vital part of Berlanga’s social commentary. There’s no privacy, either from the camera or from the supporting cast.

They say tragedy is close-up and comedy is long shot, but Orson Welles observed that when the camera pulls back still farther, a distant figure surrounded by empty space becomes once more tragic in its isolation. That’s José Luis here, as he’s led off through the dark doorway.”

“The most famous scene in the movie [...] is also the scene from which, according to Berlanga, the whole film springs. It consists of a single shot of the interior yard that joins the jail with the execution chamber. A very slow crane takes the camera up and away from a rectangular space soon to be known as ‘the white box,’ a location in which filming could take place only after the director overcame the producers' resistance. The two groups of people that surround both the condemned man and his executioner walk slowly toward the door that leads to the infamous garrote vil. This is an especially gruesome method of execution that was not abolished until 1978 and that basically consists of breaking the neck of its victim. The role reversal present in the images is the first thing to notice in this extraordinary sequence shot. This is the ur-image of the movie: ‘This image suggested to me that not only the condemned could ‘degenerate’ but the executioner himself would crumble when he has to kill. Two groups dragging two persons who are to be executioner and victim, that is the film's key image.’

With each slight reframing, with each brief panning, the filmed space is filled again with people and with things. Berlanga's camera – like Renoir's or Wyler's – is as recognizable as a signature. When it moves it makes what it films more meaningful; it even makes movement itself meaningful. Reflecting on Renoir's camera, William Rothman writes that it ‘is most characteristic when it seems primarily concerned with establishing the contingency of its frame... By this I mean the impression that the world of the film extends beyond the boundaries of the frame, so that any particular placement of the camera is only contingently determined by the world of the film.’ Beyond the boundaries of Berlanga's frame the world extends itself only to show more obstacles and more dead-end alleys to a character in need of more than a room of his own.”