PRINT
FILM
La ragazza in vetrina
Woman in the Window
,
,
92’ 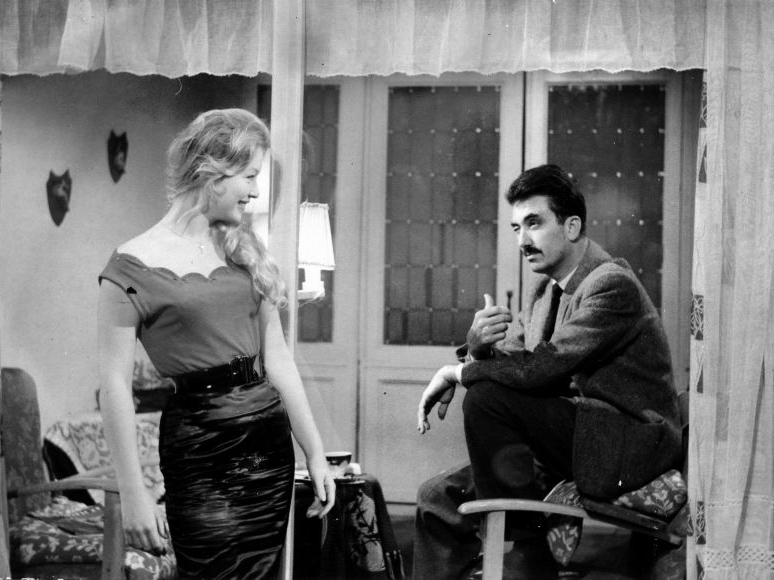 Beginning with a visceral look at the harsh working conditions of miners in the Netherlands, La ragazza in vetrina transforms into a risqué love story as two of the miners – Italians Federico (Lino Ventura) and Vincenzo (Bernard Fresson) – head to Amsterdam to hit the town. In the city’s red-light district, the pair meet sex workers Else (Marina Vlady) and Chanel (Magali Noël), with whom they strike up whirlwind relationships.

“Luciano Emmer's film is a Dolce Vita, but on another level.”

“I drew up a story outline about twenty-five pages in length, which Pier Paolo Pasolini came across in the producer’s office. Fascinated by the idea of the contrast between these Mediterranean lads and these porcelain dolls all made up under the lights of the shop windows, he called me. He wanted at all costs to write the screenplay, and that is what he did: ‘It’s beautiful. I don’t care if they don’t pay us anything for it.’”

“It is surprising to see so many affinities – most likely unaware to the authors – with another mythical film, the Belgian Déjà s'envole la fleur maigre (1959) by Paul Meyer, which focuses attention on the issue of Italian economic migrants with a ruthless lucidity that seems to peep through Emmer's pessimistic gaze here.”

“After being banned from filming in Marcinelle, Belgium [where only four years earlier, a major disaster killed 262 miners, half of which were Italian] and discouraged by the impeccable galleries of the Dutch ‘pits’, which were ill-suited to portray a claustrophobic place, Emmer decided to build in Amsterdam's Cinetone studio, a sort of Cinecittà, the tunnels that run through the bowels of the earth in which he sets the drama of coal mine work, as well as the most touching scenes of the entire film.”

“From the night of the outdoor scenes we enter the perennial night of the mine, where the faces of the workers mingle with the darkness of the walls. Emmer tells us about each of them through reiterated gestures, long close-ups, and his patience in descriptive camera movements that reminds us of his expertise in narrating non-moving images: paintings.

Even today, we are still troubled by Emmer's very close relationship with documentary filmmaking: we witness a raw film that stops being just fiction and turns into a tale of a reality parallel to post-World War II welfare.”

“La ragazza in vetrina was supposed to be a turning point in Emmer’s cinema but it went on to become a cursed film. It was blocked by the Italian censor, who held it up for months before finally issuing a 16+ rating, after eliminating key scenes considered too raunchy. Nevertheless, many felt that the censor’s real target was actually the description of the working conditions faced by Italian emigrants. The full-length Italian version was only restored forty years after its release.”