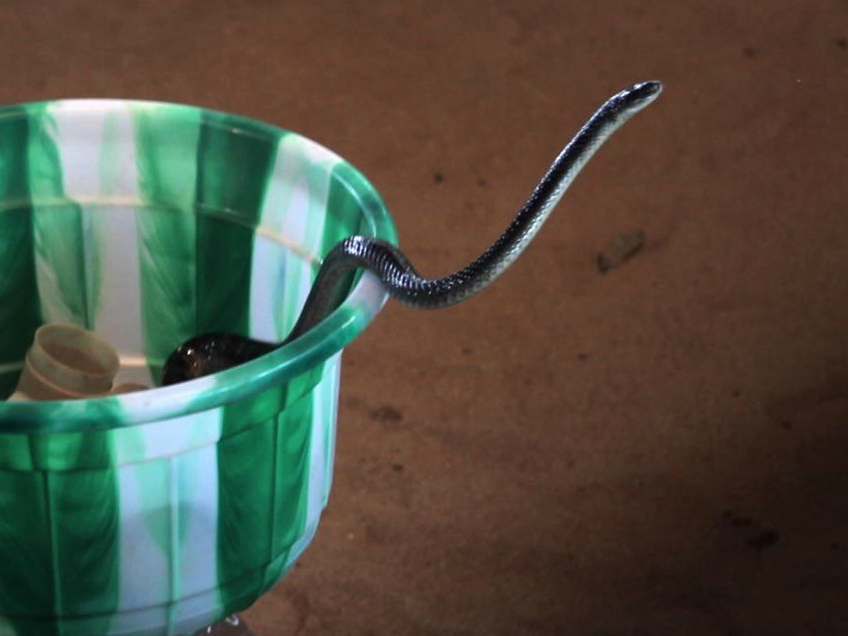 “Anthropology has been a hotbed of arguments about essentializing difference, about controlling the Other, so isn’t it dangerous to start making the codes of that discipline one’s own? Let’s move to fig. 3, Le songe de Poliphile [The Strife of Love in a Dream] (2011) [...]. Shot in France and India, the film braids vivid imagery of pilgrimages and ritual theatre with comic books, statues and pharmaceutical laboratories synthesizing anti-anxiety drugs. A work about fear, including Henrot’s own anxieties about visiting India, its soundtrack marries serpentine drones to thunderous kettledrums, evoking atmospheres of dread and climaxing in hedonistic abandon. Throughout, the snake is used as a metaphor to symbolize both fear and healing. We see snakes crawling across rocks, snakes represented in classical sculpture, snakes wriggling through hands, snakes sliding through Tintin books and Fritz Lang’s Indian Tomb (1959).

Opening with psychoanalyst Sudhir Kakar’s line that ‘India is the unconsciousness of the West’, Le songe de Poliphile at first seems to herald a troubling Orientalism both old and new, as ‘spiritual’ India is juxtaposed with scenes of technological, business-minded India. (The country is one of the major suppliers of psychopharmaceuticals to the West.) In some respects, the film skirts a lyrical universalism that privileges generalized similarities over the specific historical, economic or cultural conditions under which a group of people are acting. Henrot produces an entrancing parade of images, ‘assembled in a network of meanings, somewhat based on the principles in Mnemosyne [1924–29] by Aby Warburg, by merging them into an atlas of images of different cultural and worldly references, all according to the principle of elective affinities’. Magnetic as the imagery is, the experience of watching Le songe de Poliphile is a dangerous seduction. The audience is never allowed to know what kind of rituals we’re looking at, what pharmaceutical drugs are being made or where the snippets of found source material come from. Only Henrot knows its inner workings. Le songe de Poliphile is about privileged knowledge. It moves and feints as if it were documentary, but it conceals risky subjectivity.”

“Accumulation, and showing ‘many things’ allows me to show how things were secretly existing in degrees, and not in essence. Our language and our concepts are based on difference and opposition and I think that the language of a film should work in a different mode, based on similarities. I wanted my film to progress not didactically but like a flux – there are too many images, too many ideas. I’m hoping the viewer just lets go, and doesn't try to read the image like a text. That’s why I liked the reference of Polyphile (in French the title of the film is Le songe de Poliphile). Poliphile can be understood as ‘friend of many things’ (from Greek Polloi ‘many’ and Philos ‘friend’).”