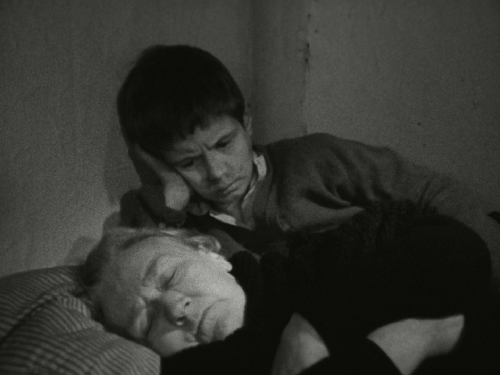 Bill Douglas’s films My Childhood, My Ain Folk and My Way Home are three of the most compelling and critically acclaimed films about childhood ever made. The narrative is largely autobiographical, following Jamie (played with heart-breaking conviction by Stephen Archibald) as he grows up in a poverty-stricken mining village in post-war Scotland. In these brutal surroundings, and subject to hardship and rejection the boy learns to fend for himself. We see him grow from child to adolescent – angry and bewildered but playful creative and affectionate. But these films are not a depressing experience. Jamie is a survivor, bold and curious. The cinematography is beautiful, creating visual poetry from startling, bleak monochrome images. When Bill Douglas died in 1991, British cinema lost one of its most original, and neglected artists.

“Surely it is imagery that is the language of cinema, a brand new language that almost a hundred years after its discovery is still to be properly learnt. The silent cinema started to learn it…Sometimes I fear it may be a lost language”

“When I think of the three films that constitute Douglas’ childhood trilogy I think back to a favourite passage from Raymond Carver’s introduction to a collection of his own stories. He writes: ‘V.S. Pritchett’s definition of a short story is “something glimpsed from the corner of the eye, in passing”. First the glimpse. Then the glimpse given life, turned into something that will illuminate the moment and just maybe lock it indelibly into the reader’s consciousness.’ Clearly, I am not discussing short stories or the response of readers to the printed word. Yet something about the glimpse given life seems to enlighten the work of Bill Douglas. Working as he does in the interstices of memory, imagination and realism, his approach provides glimpses, small shining moments of a single event within the context of an entire life. Where this begins to work in constructing a particularly cinematic language is that these glimpses add up. The narrative itself is not a glimpse. The story he tells is full of the complexities of a life interwoven with illusory images and emotions that outweigh the factual circumstances of their origin, of fleeting impressions, staggering beauty and incomprehensible pain. This life which, at a distance, retains a certain coherence, is made up of the fragments and glimpsed impressions to which Pritchett refers. Each scene created by Douglas stands alone: a discreet, transitory moment loaded with uncertainty. Each image is a moment whose inherent meaning is ambiguous, but which is enriched by the sequence of impressions that follow. To a certain extent, this is created through Douglas’ use of dialectical montage – one of the few ‘techniques’ it is possible to see Douglas drawing from his own particular cinematic passions (he is said to have admired the early Soviet montage stylists and Donskoi in particular – but it is perhaps less tangible than this technique alone.”

“For as long as I can remember I always liked the pictures. As a boy I spent so much time in cinemas, a friend suggested I take my bed with me. I would have, had it been possible. That was my real home, my happiest place when I was lucky enough to be there. Outside, whether in the village or the city, whether I was seven or seventeen, it always seemed to be raining or grey and my heart would sink to despairing depths. I hated reality. Of course I had to go to school - sometimes. And I had to go home and apply myself to the things one has to do. But the next picture, how to get in, was the thing that occupied my mind. There was never any money to buy a ticket. Still, there were ways. I could get into the Pavilion, or The Flea Pit as we called it, for the price of two jam jars, washed or unwashed. That they were acceptable unwashed was no mean concession as I would sometimes have to ferret through buckets for the sticky objects and make a desperate last minute dash so as not to miss the beginning of the picture. How exactly did the jam jar system work? Well, it began with the war years when waste of anything was discouraged. Whereas before children had used the jars for target practice, now they could make it rich by returning them to the grocer (one penny each) or simply leave the business transaction to the Picture House. Sometimes, when I could not find any jars, I had to sneak in by a side door. What an agonising experience it could be lying in wait, down the side of the cinema, hearing only the sounds of the magic show inside, waiting for what seemed an eternity for that heartening clack of the door opening. Imagine actually penetrating the Palace, lurking for a moment inside the toilet so as not to arouse suspicion, sliding open the swing door to a crack, getting the eyes accustomed to the dark, keeping an eagle watch on the usherette. And then the final brave move forward into the auditorium, careful not to sit on a strange lap searching for a place. It was danger stations if that happened, for at the first signs of a rumpus the torch became a spotlight for interrogation. It was no use saying that you had chewed your ticket by mistake. Out you went.” 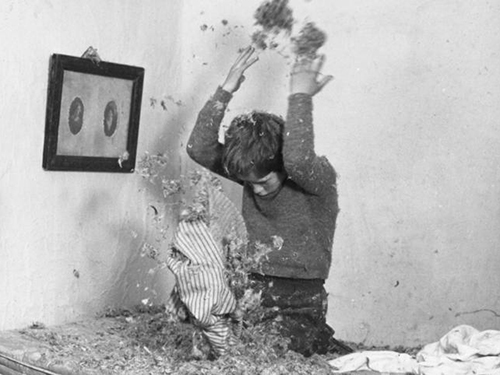 In My Ain Folk (1973), Tommy is taken to a home whilst Jamie goes to live with his paternal grandmother whose cold contempt and mistreatment are only alleviated by her drinking habits. 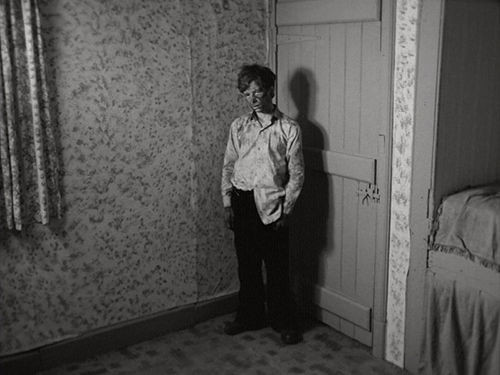 Jamie leaves the children’s home to live with his paternal grandmother. After working in a mine and in a tailor’s shop, he is conscripted into the RAF, and goes to Egypt, where he is befriended by Robert, whose undemanding companionship releases Jamie from self-pity.