PRINT
FILM
O slavnosti a hostech
The Party and the Guests
,
,
71’ 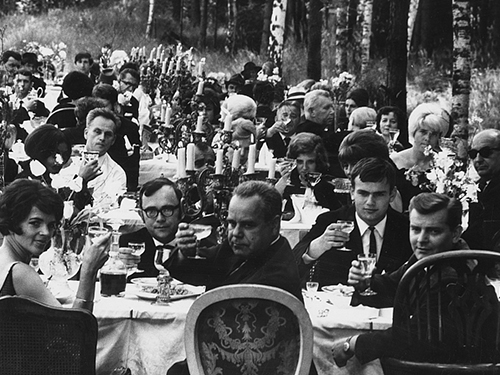 “Acknowledging the influence of Ionesco, [scriptwriter] Ester Krumbachová observed that she tried to create dialogue in which the characters said nothing meaningful about themselves – ‘It was my intention to demonstrate that people generally only talk in terms of disconnected ideas, even when it appears that they are communicating with one another. I tried not to mimic real speech but to suggest the pattern.’ [...] The film not only creates the sense of a world in which weak people collaborate in creating the reality that oppresses them but also a world that has become absurd, where words have become slogans, principles have been emptied of meaning and the only possible moral stance has become one of silence and abstention.”

“In the past, heroes used words to describe tragic situations. Now, tragedy is revealed by pictures, and our words have no relationship to what we see.”

“Silence and ‘natural’ sound are dominant. Throughout the first 30-plus minutes the most discernible sound other than speech and extra-vocal noises is the delicious friction of shoes against gravel as the guests tramp along country pathways. I imagine this is nothing other than a concrete by-product of shooting in country lanes strewn with shale but one is tempted to read it symbolically as a gnawing prelude to a grim and baffling denouement. As the movie continues it becomes apparent that the sound of rural Czechoslovakia – if indeed, it is Czechoslovakia – is obviously controlled. For instance, in one key scene the chief of what is implied to be the secret police sits at a desk in a clearing and interrogates the guests, guests who are in a state of Kafka-esque befuddlement as to what it is they are guilty of – trespassing? During his interrogation of the ‘guests’, the chief talks of nature and birds and their apparent freedom, and as he does so bird song and natural sounds are heard or rather conjured. As if the countryside is an illusion subject to the whims of a nebulous autocracy. It’s at that point that I realised that for me it is Němec’s graceful, restrained and symbolic use of sound and his subtle deployment of music that make this film so captivating.”