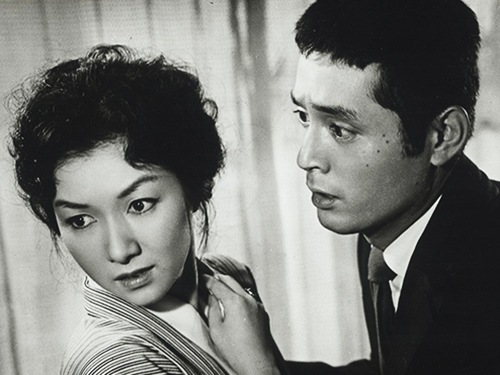 “Melodrama addresses us within the limitations of the status quo, of the ideologically permissible. It acknowledges demands inadmissible in the codes of social, psychological or political discourse. If melodrama can only end in the place where it began, not having a programmatic analysis for the future, its possibilities lie in this double acknowledgement of how things are in a given historical conjuncture and of the primary desire and resistances contained within it.”

“The men in this world, though not necessarily unsympathetic, have little to offer the heroines. Even those who appear to have serious romantic intentions prove to be fantasists, bullies, or egotists. Yet the society under examination is organized in such a way that what passes for female independence can only be achieved within a patriarchal framework; even the female club owner Keiko works for acts solely in the interests of a culture in which women are the servants of men. This point is neatly made in When a Woman Ascends the Stairs during the scene in which Keiko visits one of her clients, Goda, in his hotel room. Proudly displaying the contents of a bag full of bank notes, Goda offers to finance a bar which will be owned and run by Keiko, making it clear that he expects to receive regular sexual services as a reward for his largesse. The hotel room is adjacent to a public courtyard, and before showing Keiko his money, Goda closes a partition, removing the courtyard from view. This gesture is certainly a natural one; Goda simply wants to conceal from anybody who might be using the courtyard the fact that he has a great deal of cash in his room. Yet the effect is strikingly suggestive; for Keiko, accepting Goda’s money will not involve setting out into a world of new freedoms, but, on the contrary, a closing in, a shift into a social sphere where her independence will be more severely curtailed than ever.”

“Naruse’s gift here is being able to keep alive surprise and the fresh possibility of hope, even as you know deep down that he’s going to snatch most of that hope away. Endurance is the final antidote to despair, and that he does not extinguish. For a director whose vision is so frequently called pessimistic, what continuously engages and enthralls in When a Woman Ascends the Stairs is a lightness of touch, deft and coolly understated, like its cocktail jazz score.”