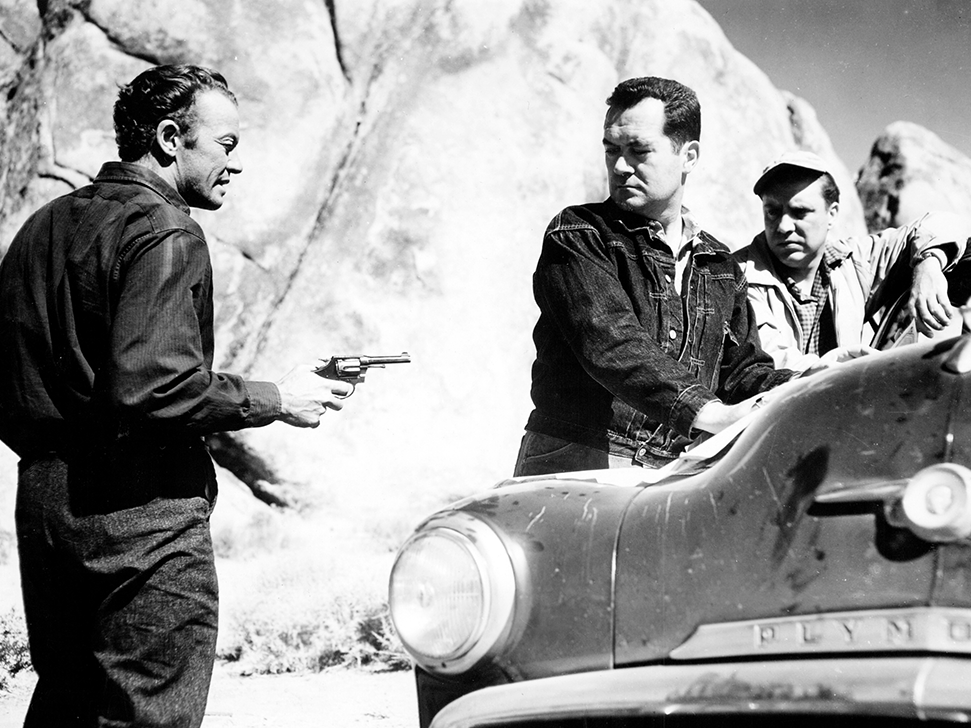 Two fishermen pick up a psychopathic escaped convict who tells them that he intends to murder them when the ride is over.

“This is the story of a man and a gun and a car. The gun belonged to the man. The car might have been yours – or that young couple across the aisle. What you will see in the next seventy minutes could have happened to you. For the facts are actual.”

“A woman of extraordinary talents, and one of those talents was directing. Her tough, glowingly emotional work as an actress is well remembered (They Drive By Night, High Sierra, ...), but her considerable accomplishments as a filmmaker are largely forgotten and they shouldn’t be. The five films she directed between 1949 and 1953 are remarkable chamber pieces that deal with challenging subjects in a clear, almost documentary fashion, and they represent a singular achievement in American cinema. Her work is resilient, with a remarkable empathy for the fragile and the heartbroken. It is essential.”

“Ida Lupino – Hollywood’s sole female filmmaker of the 1950s, who referred to herself as Mother on set and had a director’s chair with ‘Mother of Us All’ embroidered on the back – directs an all-male cast in a taut, 70-minute thriller. Developing, perhaps out of budgetary restraints, a remarkably lean, stripped-down visual style, Lupino placed her emphasis on the hard, elementary particles of human expression – the angle of a look, the position of a hand. Avoiding obvious effects of rhythm or heavily underlined climaxes, she evolved a passive, rational, almost scientific approach to her characters, and her films can have the air of laboratory experiments – human behavior observed under carefully controlled conditions. The Hitch-Hiker places three characters – one of them a psychotic killer – in the closed environment of an automobile crossing the California desert; as Lupino observes the shifting loyalties among the three men, she could almost be constructing a mathematical theorem of power relationships.

Frank Lovejoy and Edmund O’Brien are two war buddies taking a break from the wives for a Mexican fishing trip; a hitchhiker they pick up turns out to be a crazed killer wanted in nine states. William Talman’s Everett Myers is a fascinatingly abstract creation, filmed by Lupino first as a discorporate flurry of hands and feet, then as a satanic figure whose grinning, key-lighted face seems to float by itself in space. With his paralyzed right eye (he sleeps with it wide open), Myers may represent the return of the fascist evil the two men confronted during the war; he may also represent something inherently violent in the American male that, having been liberated by the war, has to be faced down and defeated by the two vets before they can return to a normal life. Lupino’s use of the desert setting, rich with associations of nuclear devastation, seems to look forward to the science fiction films that would flourish later in the decade.”

“Though many critics have examined The Hitch-Hiker as a film noir, a road movie, and one of the first serial killer docudramas, (...) the film does not strictly adhere to the confines of genre. In many ways it behaves more like a horror film or a war film than a film noir. Many elements of the film noir are completely missing: a femme fatale is replaced by a homme fatal; much of the movie takes place in the overly lit vast desert or is captured through the moving car window. Nobody wakes up in a pool of his own blood to be framed for murder. There are no urban sets or urban fast-talking smart-ass crooks and molls. The victims are essently a male couple. There is no good girl to save or to marry at the end. The Hitch-Hiker thus seems suspended in time and place and has an unbroken sense of menace and fear, which is never punctuated by even the slightest trace of humor or any break in the suspence. It is an unremittingly dark film, with each second infused with the specter of death.

Emmett Myers is anyone who is made pathological by the forced consensus and conservatism of the 1950s. He has developed a brutal, survivalist personality to cover up his own frail nature and insecurities, but the film is concerned with the broader picture of postwar America, a country that celebrated atomic weaponry, a country that tried to send women back to the kitchen, a country obsessed with the pleasure of excess consumption, and a country that felt it owned the world and that the world was for the taking. There is no way to miss the fact that Lupino adeptly dismantles the heterosexual white American Dream in The Hitch-Hiker. As audience members we are just as much hostages as Roy Collins and Gilbert Bowen, but we are also the perpetrator in this hellish nightmare, the tenth circle of hell as rendered by Ida Lupino.” 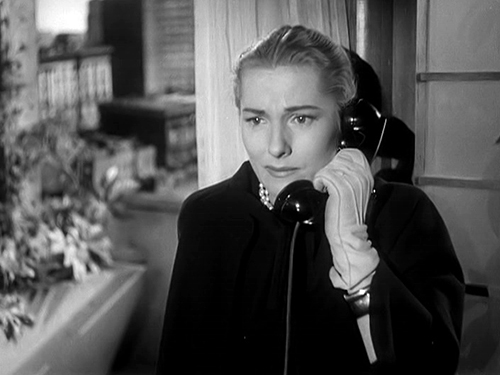 “Any woman who wishes to smash into the world of men isn’t very feminine […] Baby, we can’t go smashing. I believe women should be struck regularly – like a gong. Or is it bong? If a woman has a man who loves her, she better stick close to home.