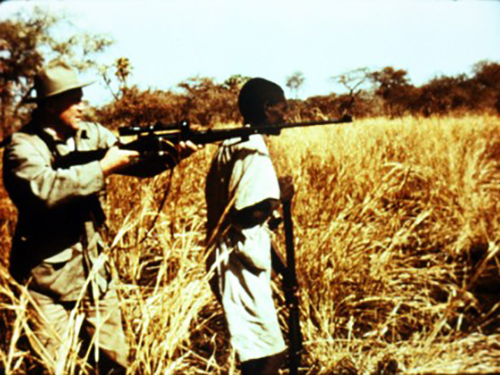 In 1961 Kubelka was hired to document the African Safari of a group of European tourists. Afterwards he hijacked the recorded material and edited it into an analysis of the many layers of violence present in the hunt, the gaze of the hunters and the film itself. The fragmentary and asynchronic montage of images and sounds generates a multitude of connections and associations which, in their turn, evoke a number of metaphorical interpretations.

“For me, Afrikareise is, in its own genre, the most intense sound film that exists. Sound and images are in synch like in nature (even if it isn’t about the natural sound of something). The sound becomes the acoustic portrait of the visual action.”

“The intensely concentrated quality of Unsere Afrikareise stems in part from the multitude of connections between image and image, sound and sound, and image and sound that Kubelka orchestrated into a unified whole. There is often a temptation to read direct thematic statements in many of the film's articulations. Editing connections are continually made on the white hunters' gazes, hand gestures, and gun-pointing, linking those actions to suggest the Europeans’ aggression toward their surroundings. Kubelka’s cuts often suggest that a European has just ‘shot’ an African, or the forest itself. The Africans, by contrast, appear as part of nature, rather than separate from it. It would be a serious mistake, however, to limit one’s perception of the film to such themes. What is most extraordinary about Kubelka's achievement is not the specific connections he establishes between elements, but rather the system that the entire network of connections form. Repeated viewings of the film reveal it as too multiple in its implications to be resolvable into a single interpretation. Thematic results of specific articulations are merely a few aspects of many in the film. Kubelka’s almost musical form establishes a grand relation between virtually every image and sound and every other across the entire film. The resulting multitude of connections is expressive of many, rather than a few, possibilities. The viewer is ultimately led out of time, to contemplate these connections in memory, and to regard the film as if it were a monument erected as a record of civilization, not as a statement on it but as a kind of totem for it.”

“Unsere Afrikareise is about the richest, most articulate, and most compressed film I have ever seen. I have seen it four times and I am going to see it many, many times more, and the more I see it, the more I see in it. Kubelka’s film is one of cinema’s few masterpieces and a work of such great perfection that it forces one to re-evaluate everything that one knew about cinema. The incredible artistry of this man, his incredible patience. (He worked on Unsere Afrikareise for five years; the film is 12 and a half minutes long.) His methods of working (he learned by heart 14 hours of tapes and three hours of film, frame by frame), and the beauty of his accomplishment makes the rest of us look like amateurs.”

“[I]n his first film, Mosaik im Vertrauen and in his most recent, Unsere Afrikareise, that his theories of sound montage are most fully developed. Both films are organized around ‘synch events,’ to use his phrase. In his lectures at New York University and at Harpur college he contrasted ritualistic ‘synch events’ in primitive societies with their cinematic employment. He described his pleasure at witnessing an African festival in which a tribe silently watched the sun set. At the very instant that the red disk of the sun touched the horizon line, a drum-beat broke the silence and the ritual festivities began. The film-maker, he admits, cannot compete with the ritual shaman in the ‘sensuality of his materials,’ the real sun and the silent community. He must make do with a pale mimesis of the sun by the white screen or with photographed, secondary imagery. His advantages over the tribal shaman, however, are two: he can speed up the ‘synch events’ from a maximum of one a day to 24 each second; he can also combine the sound of one occasion with the image from another. The first of these advantages he explored in Arnulf Rainer; the second in Mosaik, and more radically in Unsere Afrikareise.” 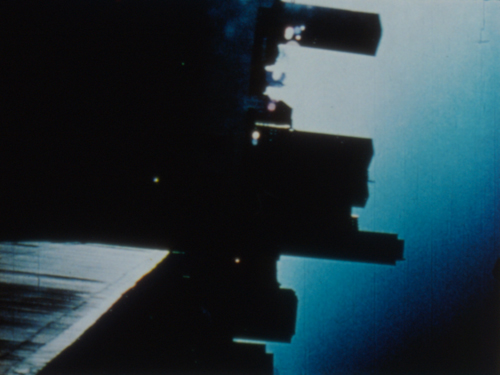 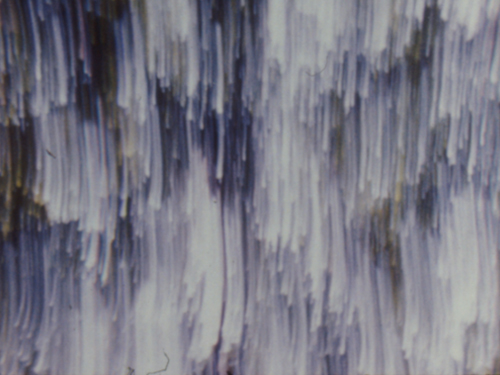 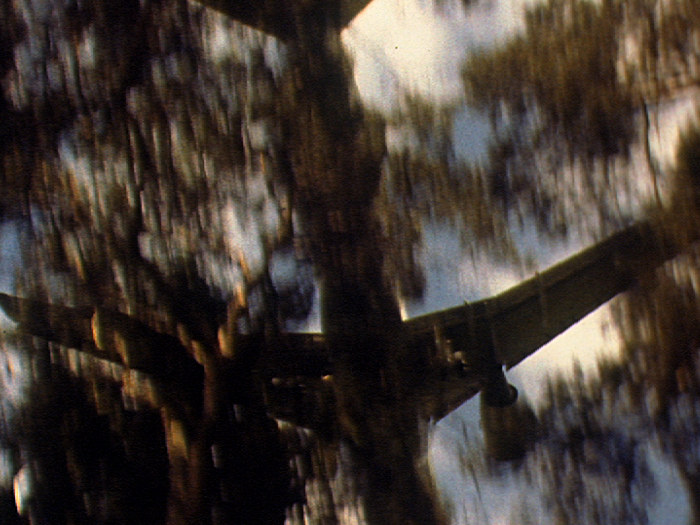 A Conversation with Helga Fanderl

“I discovered filmmaking by chance. Through an early short film that I thought was successful, I found out what I could create without language, only with the language of a small silent Super 8 film. This was overwhelming. I filmed quite a lot, and I realized that my approach to the world was very visual, although language still matters to me: I studied languages and love foreign languages, I lived abroad, I love poetry. But it was something else to create purely visual films.”