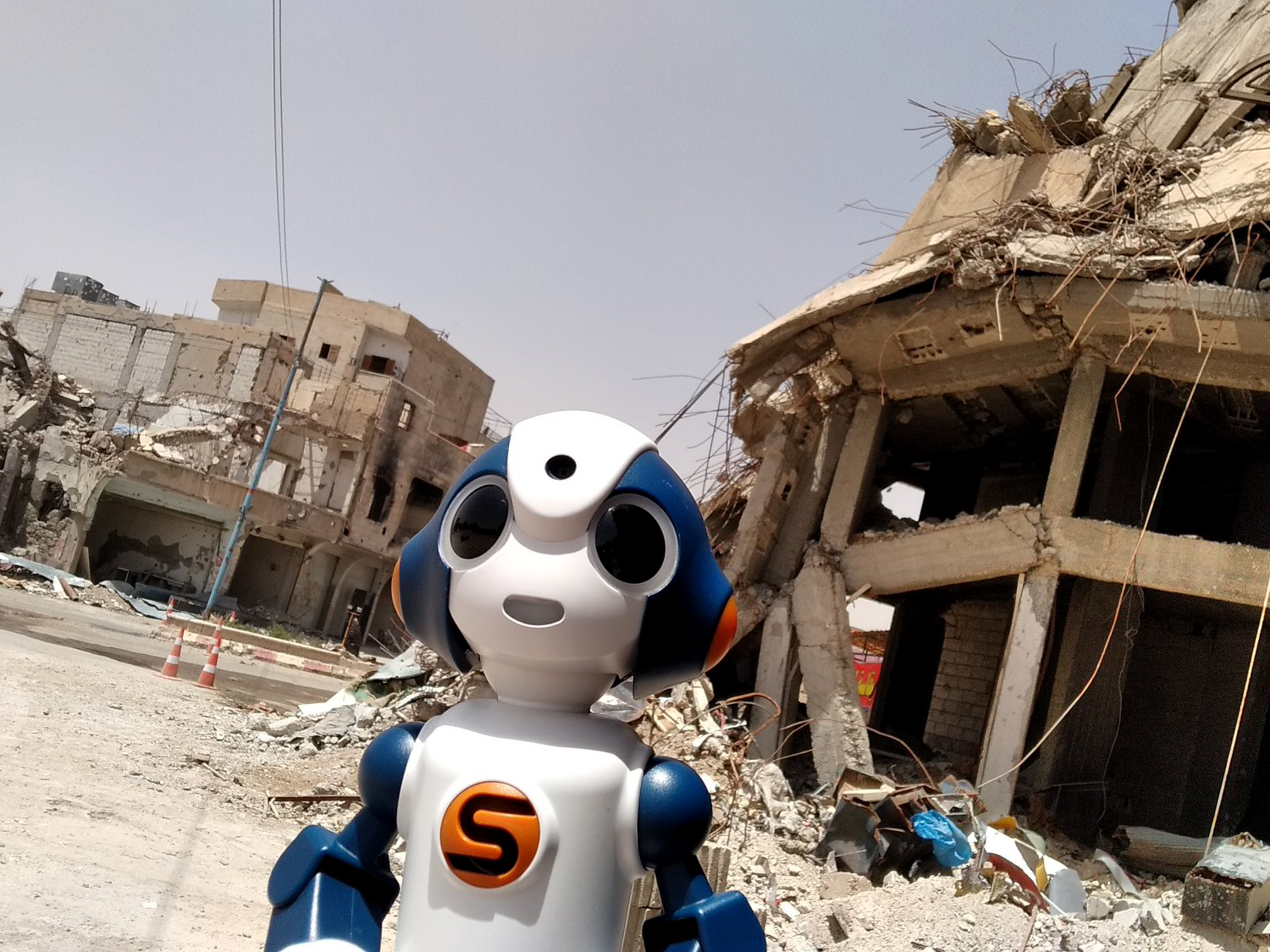 In the war zones of Mosul and Raqqa, then in Paris during the Yellow Vests uprising, filmmaker Florent Marcie confronts Sota, an AI robot, with the tragedy of mankind. As the story unfolds, the relationship that develops between man and machine questions our human condition and our future.

Your previous films take place in theaters of war — Chechnya, Afghanistan, Libya — where you were shooting alone, without a crew. But here you are accompanied in the conflicts zones. How did this project come about?

This idea came up a few years ago while editing my film Tomorrow Tripoli about the Libyan revolution. I was living in Libya and while reading many publications about the progress of algorithms and artificial intelligence (AI), I thought that personal computers had reached a sufficient degree of power that I, without being an expert working for a laboratory, could start using these “intelligent” technologies. I was absolutely convinced that we were now all on the threshold of this technological revolution.

In Libya, I was also struck by a coincidence: in mid-February 2011, at the exact moment of the outbreak of the Libyan revolution, Watson, the artificial intelligence developed by IBM, beat the American champions of the TV game show Jeopardy, a general knowledge game. After having filmed various “traditional” conflicts and revolutions over the past quarter century — deeply human battles that belonged in a way to the Old World —, I wanted to make another film about this other revolution. It seemed to me that what was unfolding under the name of “artificial intelligence” had a revolutionary scope that was deeper, more total and more universal than the other upheavals I had witnessed. This was not easy to admit: the main revolution of my time was in fact that of algorithms. Instead of going to interview scientists, I imagined an original way of filming: to bring a humanoid artificial intelligence with me to the battlefields. This approach corresponded to my trajectory and my way of working. I wanted to see what this AI could provoke in the population, what it was able of, and how I myself would be transformed, or not, in contact with it.

“The future has arrived and we didn’t even realize it. We are surrounded by robots. They dominate our lives, determine what we see and filter the information we consume, but we do not recognize them as robots but as algorithms. And these algorithms regulate not only our social networks but also our control, surveillance and spying systems. Together with a wide range of digital, simulation and visualization technologies, they transformed war into something that resembles a video game. With A.I. at War, seasoned documentarian Florent Marcie sets out to reverse the equation: if artificial intelligence, among other tools, is turning war into something abstract, a remote chess game, then he takes artificial intelligence into the trenches. More precisely, he takes Sota, a cute little plastic robot. He is not just a toy, but an experimental product of a Malaysian-based company. Marcie, as she explains in her documentary, discovered him at a technology fair and it was love at first sight. Sota can hear, understand and respond through a female voice; it can rotate its head and arms; record videos and take photos; query data over the Internet; recognize people and situations; and, through a machine learning algorithm, even assimilate information. It is a more anthropomorphic and multifunctional version of Alexa or Siri. Marcie and Sota, as in a buddy movie, travel the world and live adventures, from the rubble of Mosul, in Iraq, or Al Raqa, in Syria, to the streets of Paris during the 2019 protests. Throughout this journey, Marcie introduces Sota to French protesters, Iraqi military and Syrian civilians wandering through the ruins of their country. It is an ironic gesture. Against the gravity of the context, of destroyed cityscapes, police repression and blood on the sidewalks of the Champs-Elysées, the image of Sota in the foreground - with his round head, his anime-like proportions, his big black eyes and open mouth, his rounded and not at all threatening angles - is explicitly incongruous. The interviewees smile and join in the joke, but the contrast remains violent. Marcie, in addition to filming, also acts, becomes the protagonist, interacting with Sota as in a TikTok video or an Instagram story. He even holds debates with the robot about the meaning of life, violence, identity, death. Sota’s answers are insufficient, because there are things he can’t understand. But sometimes he achieves moments of connection and lucidity, prays as a Muslim and receives the approval of Syrian civilians while they rest and smile under the skeleton of a building. The documentary mixes scenes of rest and relaxed chatter, philosophical and deliberately naïve discussions, and simply brutal moments: a desperate rescue after the collapse of a building in Al Raqa, the image of Marcie himself with his cheekbone split open by a rubber bullet from French riot police. This back-and-forth - between Sota’s innocence, Marcie’s good nature and the dystopia of Al Raqa or Paris - makes A.I. at War an unusual documentary. Because, even when the situation warrants it, it escapes solemnity. And this lack of solemnity never translates into disrespect. It is a deeply serious documentary that nevertheless uses a comic hook that helps to deepen the critique. The political message is forceful, but also subtle. Marcie is no Werner Herzog, with his panoramic and cosmic gaze. Nor is he a Harun Farocki, who would have tackled the use of artificial intelligence by the armies and governments of the U.S., Russia and China more head-on (his installation series Serious Games, for example, does not mince words: it explicitly shows the use of video games and virtual reality as military training tools). Marcie, on the other hand, prefers to drop hints. He barely mentions the use of robots, drones, artificial intelligence and other technologies by the world’s armies and governments. But he does evoke the subject matter. When he loads Sota with facial recognition software, or software to calculate the number of people in a crowd, the wink (to state surveillance practices) is unmistakable. As is the anachronism that Sota represents. The machine learning programs and algorithms that surround us today are not like the robots in Metropolis or Terminator, they have no bodies. They are everywhere and nowhere, they do not occupy a space. (Or they do: they occupy devices or servers in databases, but they remain intangible and abstract). Sota, on the other hand, is an old-fashioned robot: it is within reach, in all its plastic glory. You can grab it, turn it over, splatter it with blood and break it.

Far from satellite images, from the remote interpretation of visual, sound and linguistic material; far from social networks and Silicon Valley; far from the sky where drones and undetectable airplanes reign; far from all that, Sota is a robot with a physical presence. It only interprets and recognizes what is in front of it. He is a globetrotter, moving along with Marcie. He can also access the internet and dictate the Wikipedia description of a Kalashnikov and Al Raqa, but not before listening to the gunfire and observing what is left of that city, always with Marcie as his private tutor. In addition to being a buddy movie, then, A.I. at War is also a bildungsroman: it tells the story of the sentimental education of an artificial intelligence. Marcie’s thesis, finally, is that all artificial intelligence depends on the information it receives and from whom. If we want robots to help us, we have to teach them how. If a government uses this technology to recognize and enumerate protesters, the protesters must turn the camera on the police forces and appropriate the algorithm. Marcie dresses Sota in a yellow vest, a symbol of the French popular uprising. It’s as if to say, ‘This robot is ours.’” 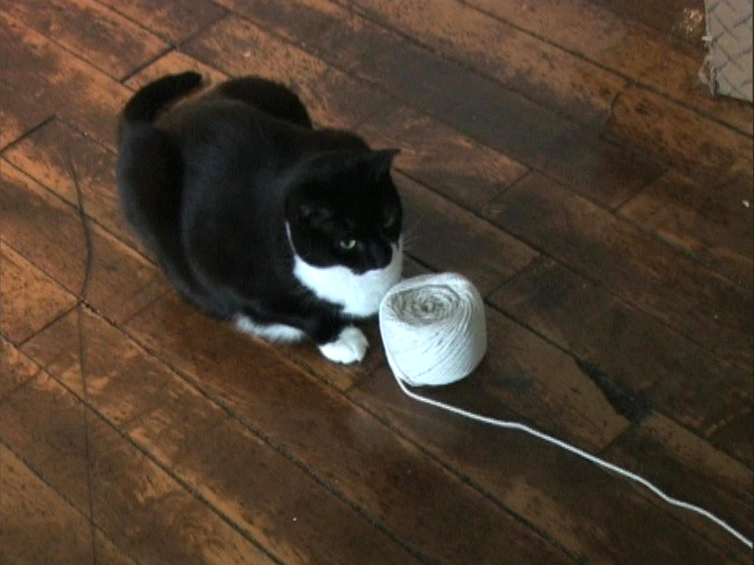 Between 2010 and 2011, the filmmakers and artists José Luis Guérin and Jonas Mekas exchanged nine video letters as the result of an initiative of Jordi Balló. The result was a feature-length film of infinite tenderness, assembling a personal diary, travelogues and key reflections about images. Existential cinephilia, poetic horizons, artistic kinship, elegiac sensibility, a community of views, radicalness, autonomy, all these things bring together these two “friends in cinema” (as Jonas Mekas puts it), whose respective works are characterised by the renewal of descriptive forms and the challenges of observation. 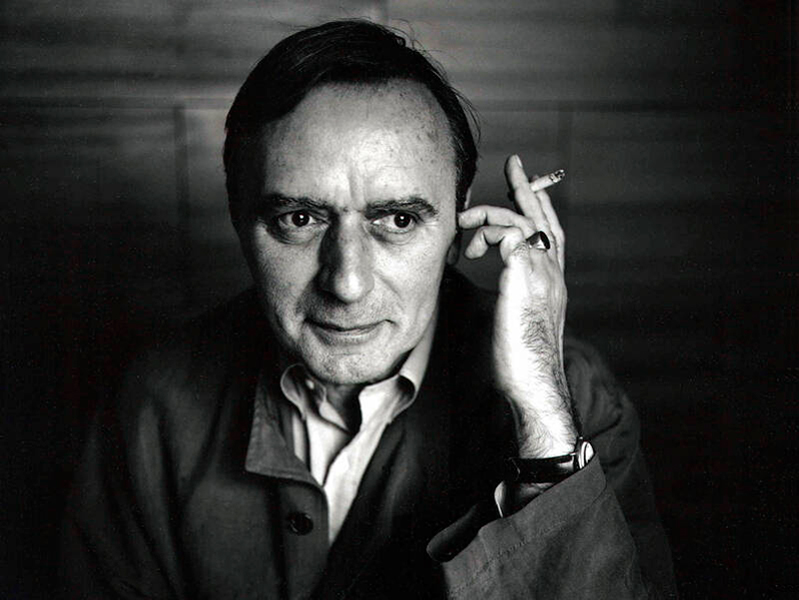 On June 8, French writer, philosopher, art critic, and cinema theorist Jean-Louis Schefer passed away at the age of 83. 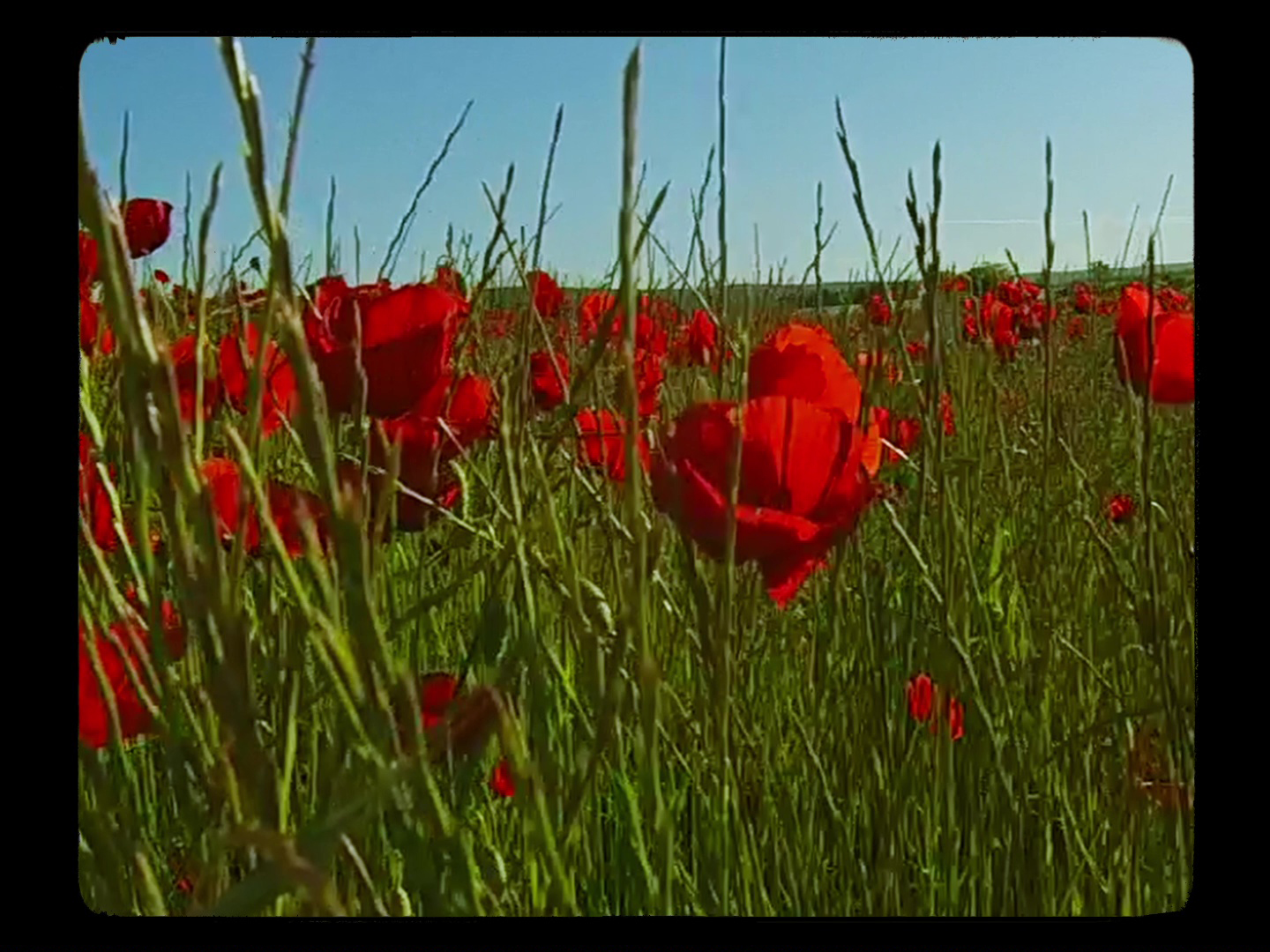 Previously, images were in the world. Today, it is the world that is swimming in an ocean of images. Our real, material and unique world; woven from and overflowing with real, immaterial, numbered (made of numbers), innumerable images. If one wants to observe contemporary cinema one must place it in the context of this exponentially rising quantitative and qualitative power of images, question the role it has played and still plays.