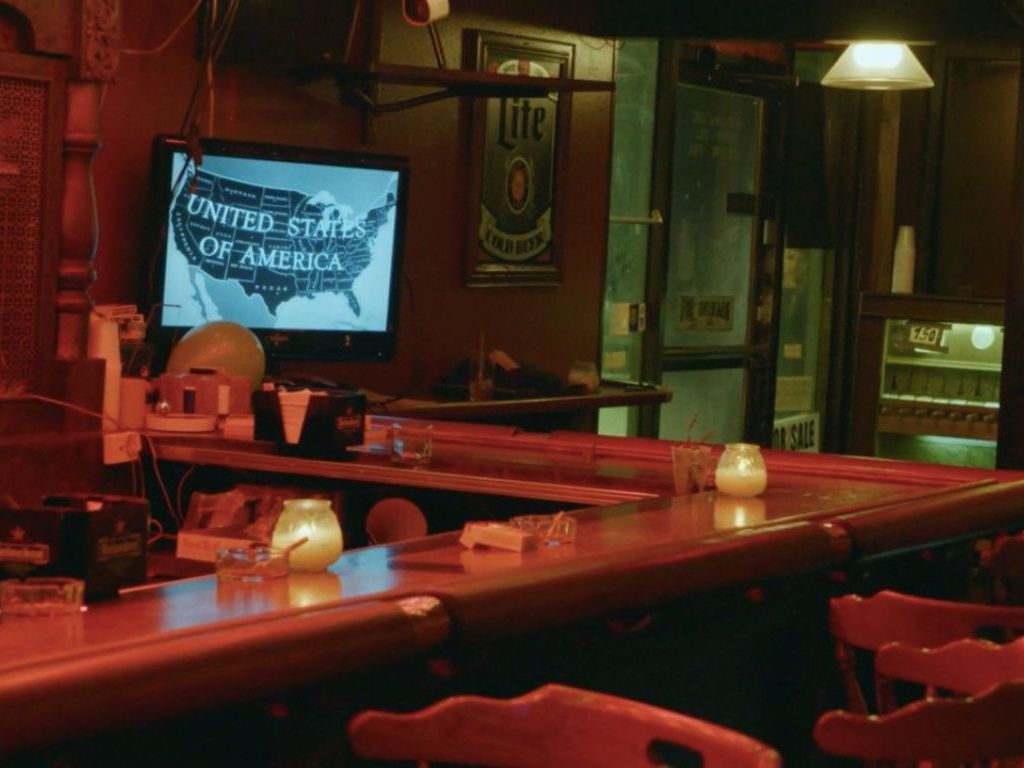 In the shadows of the bright lights of Las Vegas, it’s last call for a beloved dive bar known as the Roaring 20s. Bloody Nose, Empty Pockets is a mosaic of disparate lives, teetering between dignity and debauchery, reckoning with the past as they face an uncertain future, and singing as their ship goes down.

“[T]he film moves ahead with a loopy lurch-and-stagger cadence; like a drunk trying to spit out a story, it can sometime seem to have lost the script entirely. It conveys something of the savor of leaking toilets and a dozen cigarette butts drowning in the dregs of a plastic cup of gin-and-tonic. And yet after all the slurring and sloppiness and sloshed sentimentality when you emerge from the film, blinking, into the hard light of day, you may feel you have gleaned something essential about what it is to be living in the United States through the second decade of the 21st century, or about what it is to be alive, or about the particular half-life of going on a good, knee-walking drunk.

Such rare verities were achieved through quiet acts of cinematic imposture. The Roaring ’20s is not, in fact, closing. Some deceptive exteriors notwithstanding, it also isn’t located in the precincts of Las Vegas, but rather on the tatty outskirts of New Orleans, where the Ross brothers have for some time been based. Martin is a trained theater actor, and though his cohort at the bar are in most cases habitués of local dives playing unscripted versions of themselves, they are doing so in a planned and prepared environment with full cognizance of their participation in a film, even if the very real heavy pours from the bar might occasionally blunt that cognition.”

“We did a primary day shoot where we allowed some of the old-timers to move into the space, to start to really inhabit it, to start to build comfort and familiarity, and for us to also understand the space. That first shoot was like a nonstop ten-hour day shoot, two-camera, closed set. And we learned so much about how we were doing it, and what their arcs were. So that when we embarked on the 18-hour shoot with the full cast, we had a good sense of where things were gonna go, and so did the old-timers, who were the regulars. [...] While we certainly influenced the space with different stimuli and the comings and goings of different characters, we really did let the thing go, and I guess for all intents and purposes we were documenting it.”

Flavia Dima: You have these insertions of clocks throughout the film, which is a nice nod to the history of cinema. What was your structuring principle, beyond the notion of time passing in a limited space and period, and the concept of building sequences?

Bill Ross IV: Tough question. I think we broke it down to – over the course of two years of editing – the level of drunkenness, among other things.

Turner Ross: The five stages of grief too. And time of day.

Bill: The color wheel [laughs]. Anytime there’s text on screen, that’s basically a new chapter, a breath before we get another 10-15 minutes. The jukebox helped quite a bit in building these, like, pockets.

Turner: Maybe say something about your initial impulse to make unbroken scenes and where you arrived at.

Bill: Yeah! So I wanted to do this since Tchoupitoulas (2012): to make a film that’s just like, ten shots, seven-minute-long. So we shot it like that, in veeery long takes throughout the bar, so the first cut was like, three and a half hours [...]. But our friends told us that didn’t work.

Nicolas Rapold: What were some cinematic touchstones for you that have really captured some of these feelings of life in a bar?

Bill: Have you seen that UCLA is doing an American neorealism show? Someone sent me that the other day, and I thought, these are all our references for Bloody Nose, Empty Pockets. Dusty and Sweets McGee (Floyd Mutrux, 1971), The Exiles (Kent Mackenzie, 1961), On the Bowery (Lionel Rogosin, 1956). Lions Love (… and Lies) (1969) by Agnès Varda was a really big one… What else was our cheat sheet?

Bill: Fat City (John Huston, 1972) is a great one. That probably has the best bar scene of all time. So real.

“Husbands (1970) should probably be only ninety minutes, but we appreciate the fact that John Cassavetes just doesn’t stop, and that these actors give you space to just be in the room with them. You’re spending time with these rather reprehensible people. We picked this movie specifically for its long drinking scene, which is so rowdy and gross but also so real. At times it feels forced, but in certain moments, like when Peter Falk takes his pants off, you feel like that couldn’t have been in the script – but maybe it was! It also feels like the camera isn’t looking at them, that instead Cassavetes created a scenario in which the filmmaker and the characters are in it together. That’s what we try to do with our films; we want to create dynamic scenarios in which we’re not pointing the camera at but being a part of, scenarios that have the ability to take on a life of their own. We want to capture not only what’s intended but what is revealed.”