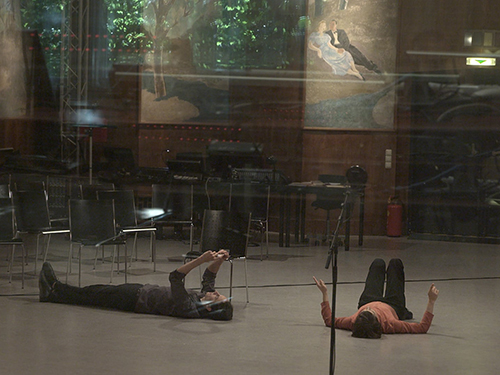 Die Geträumten shows a staged recording of the almost two-decade correspondence between poets Ingeborg Bachmann and Paul Celan – an Austrian and a displaced Romanian Jew – that began in 1948 and ended a few years before their premature deaths. The approach succeeds largely on the chemistry and charisma of “leads” Anja Plaschg and Laurence Rupp, seen wavering in and out of character between smoke breaks and sessions at the microphone, returned to each time with amplified emotional effect, and in the final measure heartbreaking.1

“This longing, these sighs from soft pillows, I am happy, endlessly happy, to be so filled with this thought. Maybe you will come, maybe you will walk through the door and take from me. I am so ready to give.”

Karin Schiefer: Both Ingeborg Bachmann and Paul Celan are very linguistically intense voices in post-war German-language poetry. How do you find a film language that corresponds to this linguistic concentration? How did you approach the scenic writing involved?

Ruth Beckermann: The idea that two people (not necessarily actors) should play voice artists recording the letters in a sound studio for an audio book or radio show was there from the very start. But originally it was only going to be part of the film. The plan was that the voices would shift OFF and I would then film at the places where Bachmann and Celan lived – not documentary style, in their homes, but in a very associative, free, modern sense. In Paris, Munich, Zurich and Rome. At the beginning I was thinking in a more essayist direction, and I’d already filmed some sequences and recorded sound at a number of places. Before we did the filming with the actors I arranged a run-through with friends to establish whether the script was powerful enough for such a radical reduction. I think by then I was secretly hoping it would turn into a sort of Kammerspiel, an intimate psychological study. When we started filming the two actors, Anja Plaschg and Laurence Rupp, were so powerful that the condensed version worked fine. After the first few scenes my editor Dieter Pichler and I looked at each other and said: “That’s it – we stay in the room”.

Does the density of the language make it necessary to condense it drastically in this way?

Definitely. But the subject was in the foreground. A love story that is so romantic and tragic is very powerful in itself. The language the two of them use is incredible. Under those conditions you can condense the material a great deal. I like doing that anyway. But initially I was interested in something completely different: how would young people today respond to these letters and the language they use? It was an experiment. I wanted to see what young people today would make of the letters. Bachmann and Celan were very young when they met, after all: she was 22, and he was 27. I wanted to use young actors, and I wanted to be able to imagine the words triggering something inside them – both individually and in their relationship to one another.

Ruth Beckermann in an interview with Karin Schiefer2

“[The Dreamed Ones is] an altogether gutsier approach to ‘translating’ a literary text to the screen than Raoul Peck’s I Am Not Your Negro, a thuddingly literal-minded interpretation of a text full of revolutionary fervor, James Baldwin’s unfinished 1979 Remember This House, [...]. Among other things, The Dreamed Ones recalls the space for yearning, and the concentration of feeling made possible by an epistolary culture that has been all but erased in the age of the ‘U up?’ text.”

Scope: I remember the controversy that accompanied the publication of Susan Sontag’s letters (by her son), when many thought that private correspondences should remain private for the sake of the dead. In the case of Bachmann and Celan, these letters are filled with truly private declarations of love, despair, desperation, and anger, and oscillate between proclamation and confession. The overwhelming beauty of the exchange and the extreme nature of its unfortunate circumstance lend a mythic, and, yes, dreamy quality to it. How did you confront these issues when you decided to make this film? Or perhaps you have a different take on the letters?

Beckermann: For me, this love story is paradigmatic. It is a modern love story, a love story happening after the catastrophe, the Shoah. Imagine those beautiful young people who belonged to two collectives that had been enemies a couple of years ago falling into each other’s arms in the spring of 1948, and in Vienna of all places. It is also modern in how they view the Other. The Other as a stranger, someone you will never fully understand. In his first letter, which is the poem “In Egypt,” Celan already shows her the limits of their possible relationship: “You should say to Ruth, to Miriam and Naomi: I sleep next to her.” He remembers those Jewish women and he tells his lover that he does. Her place is the place of the stranger. I had no problem whatsoever concerning intimacy. I think those letters are somehow fictional; they partly invented their love by writing letters. In fact they spent only a couple of months together but exchanged letters for 20 years. Written words can be very intense—very erotic—and they can hurt a lot more than spoken ones. Both of them struggle to express their feelings as accurately as possible.

Ruth Beckermann in an interview with Cinema Scope4 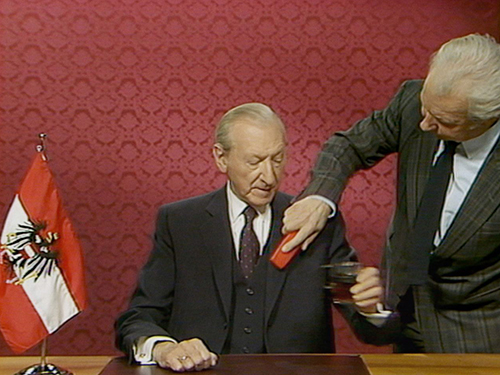 “When I looked at the material I shot 30 years ago, I was shocked. Had I really forgotten how easily emotions can be stirred up against others and used by populist politicians? 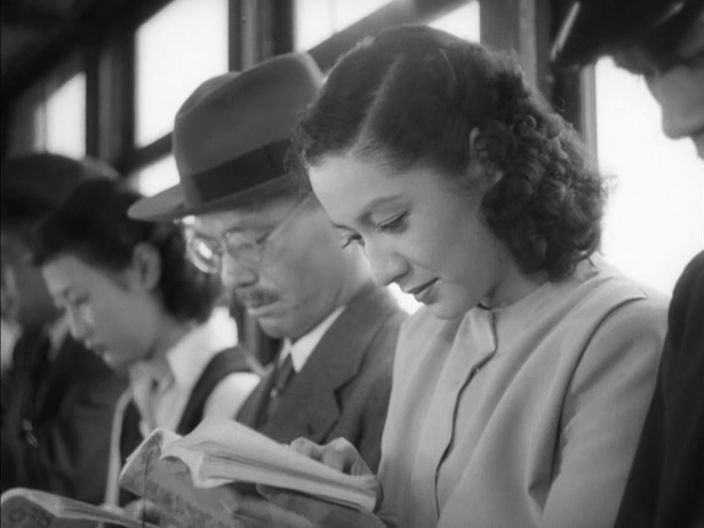