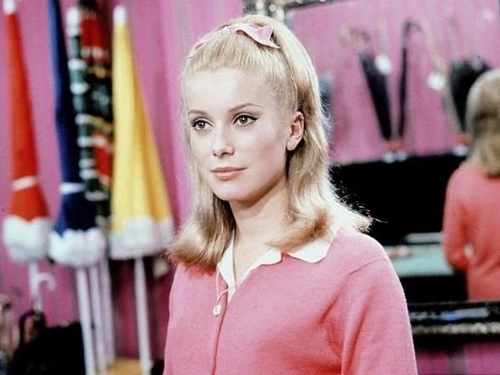 “Last night, time and my body decided to take me to the movies. I saw The Umbrellas of Cherbourg, which I took very hard. To an unmoored, middle-aged man like myself, it was heart-breaking. That’s all right. I like to have my heart broken.”

Kurt Vonnegut in a letter to his wife2

“For, it’s in Jean Rabier’s lushly luminous, Eastman-coloured cinematography, in concert with Bernard Evein’s deliciously decorated set design, where the film all but visually ‘hums’ as a tonal symphony. Entire scenes display colour-coordinated characters, boldly and beautifully blending in with their surrounding environs and wall-papered interiors, in what often resemble Matisse and Dufy canvases, come magically and movingly to life, right down to a kind of vibrantly two-dimensional perspectivity. Here is a naturalistic world, constantly under the delectable threat of being surrealistically engulfed in a post-Fauvean, neo-Minnellian wash, without having to resort to gallery-framed otherness or dream-fantasy sequences.”

“Given the artifice that defined Demy’s world, it might be surprising that his first film, Le Sabotier du Val de Loire (1956), was a documentary in the French neorealist approach of his early mentor Georges Roquier (Farrebique). Though Demy’s subsequent films diverged from that tradition and subject matter, it can be argued that many of them are proletarian dramas in which work and vocation define character – class relations are witheringly observed in Umbrellas, class struggle powerfully portrayed in The Pied Piper (1972) and Une chambre en ville (1982) – and which display a documentary impulse in their closely observed details of quotidian life and rendering of setting. [....] Demy was always topical, even overtly political, his treatment of the Algerian War in Umbrellas one of many such instances.”