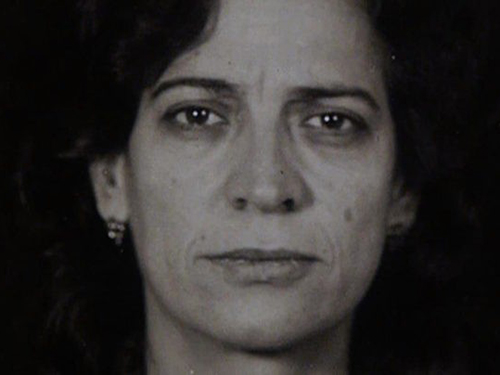 “Drawing on identity photos taken by the Portuguese political police during the dictatorship, Susana de Sousa Dias continues the work she began fifteen years ago on the possibility of representing a repressed history and giving an account of the torture now erased. One of the photos stands out for its departure from the judicial protocol. A mother is holding her baby on her knees. Her face, a three-quarters face shot as opposed to the regulatory front-facing shot, is blurred by movement and half-hidden by the child. This subjective punctum on an official document harbours the central question of the film with its sound-track of testimonies from those close to an assassinated communist activist: how does authoritarianism worm its way into family intimacy? The methods of the PIDE were typically grounded in Salazar’s values: as the family prevailed over the citizen in society, Alvaro, Rui and Isabel, Octavio Pato’s children, were also photographed as prisoners in the prison yard or the visiting room. Born of different mothers, they did not meet until late in their childhood; one of them only ‘realised that [his] father existed’ at the age of 9, another ‘never saw his lower body’ during the prison visits; Isabel only got to know her mother as a teenager. As other figures emerge from the shadows and state archives ironically remedy the lack of family photos, the filmmaker finds a form that recreates as accurately as possible a family identity that has been fractured genealogically, historically and physically.”