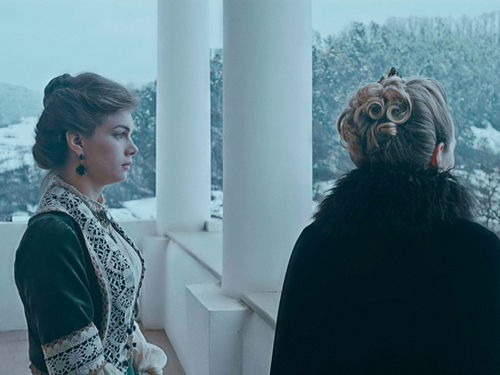 A landowner, a politician, a countess, a General and his wife gather in a spacious manor house and discuss death, war, progress and morality. As time passes by, the discussion becomes more serious and heated.

“There is a moment towards the end of “Ingrida,” the first chapter, when they are facing the window. On the wall there are two images in frame: an engraving of Konigsberg and above it something that looks like an eye or a vertebrae or… something like that. Which is, in fact, a map of Konigsberg. At a certain point, I wanted to call the film The Seven Bridges of Konigsberg, the name of a mathematical problem that cannot be solved. At the beginning, the people inside the house are talking about the two monks. Behind Madeline, you have a portrait of Leonhard Euler, the mathematician who proved why this problem was unsolvable. For me it was consonant with the fact that – I don’t know about the others – I cannot solve this problem. The trigger for the film was my confusion.”

“After lunch they debate the realpolitik of retreating from Russian pride and exceptionalism, the merits of reaching an accommodation with the English and subsuming their Russianness into a European identity, or conceding that they are European with an “Asian” sediment and might even undertake to spread this “Europeanness” all over the world. The burden of empire leads the company to consider the British and their African conquests, and there is a defence of culture as an unashamedly elitist treasure. At dinner, one of the ladies restates her radical Tolstoyan conviction that the church has eroded the real values of faith, that the Resurrection is a myth, and that the spirit of the Gospels must reside in combating evil with non-violence. She is countered by the high-born gentleman, who has a copy of the New Testament to hand, which he expounds with a tiny thread of antisemitism.”

“There’s something of Luis Buñuel’s mordant social critiques here but brought down several notches from the plain absurdity of the Spanish surrealist’s interminable dinner parties. Our debaters grapple with incredibly serious matters with a certain egoistic pleasure; as such these heady topics are rendered somewhat trivial. Puiu’s masterful blocking sees entire dialogues captured from the vantage point of another room, displaying multiple characters in a single shot; their movements and postures in relation to one another, and the camera, are more revelatory than their words. Beliefs and worldviews are subsumed into bodied identities, pawns in a knotty game of speeches and diatribes. Meanwhile, the butler István (István Téglás) and his waiting staff silently sashay in and out of rooms with cool, nervous restraint. The internal rhythms of this stratified household are set in stone, but there’s a tension underscoring even the most negligible actions – the pouring of tea, the pulling out of chairs – that suggests something threatens to burst.”