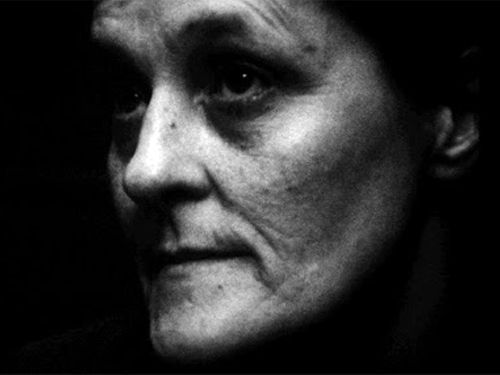 Nightcleaners is a film about the campaign to unionize the women who cleaned office blocks at night and who were being victimized and underpaid. Intending at the outset to make a campaign film, the Collective was forced to turn to new forms in order to represent the forces at work between the cleaners, the Cleaner’s Action Group and the unions – and the complex nature of the campaign itself.

“The film was about the distance between us and the nightcleaners, between the women’s movement and the nightcleaners, and was choreographing a situation in which communication was absolutely near enough impossible. I mean, there were these women who were in the offices at night who would wave, or sign or whatever, and sometimes we had to get into offices through very, very subterfuge-like means. The women’s movement came mainly from a kind of middle-class background, and I got in terrible trouble for even saying there were distances, or making a film about distances, and that is what I wanted to do, by and large… The nightcleaners haven’t changed, and it always comes back to this idea, you know, of W.H. Auden and all those people who say: “Well, you know, a poem won’t stop a tank.” Maybe not, but a poem can actually reveal a tank and… I think with Nightcleaners what we did was we revealed the situation of the nightcleaners on the one hand and on the other, the impossibility of capturing those lives.”

“A film that places the nightcleaners ‘campaign within a series of broader political discussions formulated as an ‘open text’ which asks as many questions about its own status as a film as it does about the socio-political issues that are its subject. No engaged person should overlook its challenge.”

“In the film, we hear one of the bosses rhetorically asking the women who clean for him to replicate the work they’d normally undertake in their own houses, both reinforcing their place in the home and capitalising on it in the workplace. Porter finds that only when working class women feel they’ve adequately discharged their duties at home do they feel able to take on additional duties to supplement the meagre ‘family wage’ brought in by their husbands. This impression is backed up by the night cleaners, who describe how the money they make will not be used for luxuries but necessities – clothes and food for their children. (...)

In the 1970s, collective filmmaking provided a form of collaborative action that served as an alternative to trade union activity, and the work of working-class women was a recurring artistic trope of the period. As you’ll see, Nightcleaners is far from being a straightforward documentary. It drifts between realism and abstraction, resists a linear narrative and eludes simple comprehension, causing it to be written off as ‘unwatchable’ by certain contemporaneous commentators. It rejects the objectivity that is so often claimed for documentary film and breaks down distinctions between observer and participant. It offers us fragments of unattributed thought, and demands that we – its audience – form a coherent position. There is a tactile quality to the film, its evocation of the endless surfaces in need of polishing, the institutional porcelain and the vintage vacuum. But the film goes far beyond mere nostalgia, connecting as it does to present-day struggles.”

“Speaking of Brecht's theatrical work, Benjamin frames the relationship of audience to stage in explicitly economic terms: “The more consumers it brings in contact with the production process... the more readers or spectators it turns into collaborators.” By making the spectator work to produce meaning, Benjamin argues that he or she is incorporated as producer into the process of the work’s production. This interwar argument about political theater was taken up and developed most vigorously by film theorists in Britain where Brecht was uniquely received principally as fa filmmaker rather than as a playwright. (…)

True to Benjamin’s analysis in “The Author as Producer”, the main emphasis was placed on the formal aspects of the film, with a particular focus on tropes of reflexivity. These included the persistent insertion of sections of black leader tape, the presentation of processed and repeated sequences, and the inclusion of the clapboard, all of which draw the viewer’s attention to the process of the film’s making, to Nightcleaners as filmmaking. These elements, Johnston and Willemen claimed, produces an effect akin to Brecht’s Verfremdungs Effekt, interruptions that disrupt the theatrical (or cinematic) spell and as a result make the audience critically aware of the representational illusion being presented. Reflexivity was thus connected to the notion of critical distance and the idea that the viewer would become an active participant, or to use the Benjaminian term, producer of the film’s meaning.”