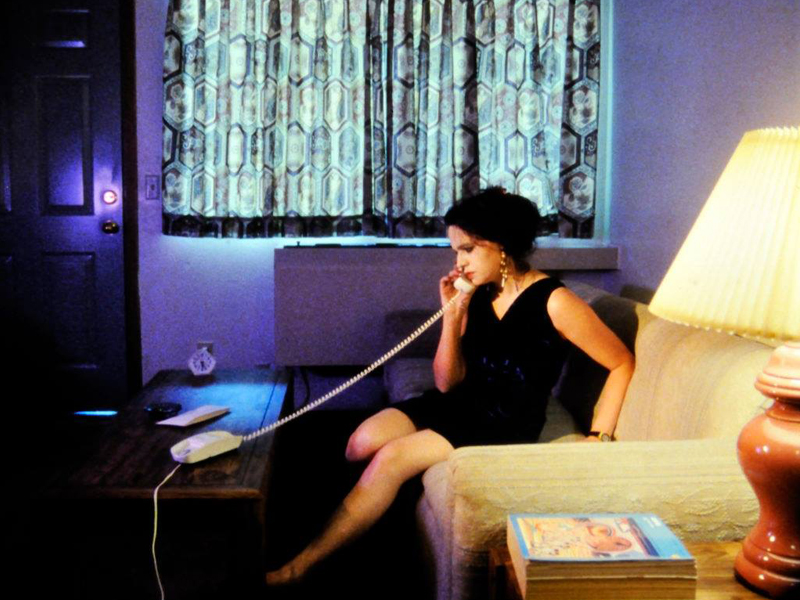 Filmed on location in the desolate landscape of Las Vegas’ desert, Queen of Diamonds follows the life of a damaged casino blackjack dealer, played by Nina’s longtime collaborator and sister Tinka. Menkes’ third feature-length film unfolds in an hypnotic contemplation, with shots alternating between the flickering of casino lights and the hallucinatory desertscape.

Are you in pain?

“My method of screenwriting is, I suppose, exactly backwards from the traditional system! What I have always done, over a period of time – and it can be many months, or a year or more – is write down images on 3×5 cards, either things that I actually see in real life or interior images that appear to my mind’s eye: “a burning palm tree,” “suicide in a car outside a casino,” “dealer is working in the casino,” etc. Sometimes images come to me in dreams, like the upside-down Jesus on the cross. I write down those images that have strong energy and demand my attention. So after I have a pile of these cards, I just have a feeling that I have enough at some point, an intuitive sense of closure. Then I start reading all the cards and seeing what narrative thread exists, and I start stringing the images together as a script. So whereas in more standard screenwriting the story comes first, with images added later, my system uses the images to lead me toward unknown narrative or semi-narrative destinations.”

“The film’s first image, the only one to appear before the glimpse of her asleep, is a queen of diamonds playing card, presented in lieu of a title as if to signal from the start that the film will give precedence to the mysterious allure of images over the communicative force of language at nearly every turn. The card also quietly gestures to something else: the film’s rigorously symmetrical form. The queen is doubled across the card’s horizontal axis, with a stamp of gold foil at her core, rotating in a black void, sparkling seductively, accompanied by casino noises. These sounds are heard again during the 17-minute sequence of Firdaus at work that divides the film into two equal halves and serves as its conceptual anchor. Queen of Diamonds begins with the playing card, but it is tempting to say that its true origin is found some 30 minutes later, in this folded middle.”

“The nearly 20 minute casino sequence presents the act of dealing cards as abstract and dancelike. Slight gestures are shown again and again, becoming mechanical as they are wrenched from whatever meaning they once held. Like in modern dance, the familiar becomes unmoored from meaning through repetition. This sequence, though mostly devoid of the filmmaker's typically expansive imagery, embodies the essence of Menkes’ work. Menkes' cinema (and the fragile world it re-represents) is a formal and narrative tightrope walk, made all the more exhilarating by the abyss of meaninglessness it straddles.”

“Instead of horses, cowboys and “Indians” signifying rugged individualism, macho heroism, and glorious expansion/conquest, Menkes’ western presents a frontier desolated by greed, destroyed aesthetically by the tacky appurtenances of the consumer culture, and inhabited by ghost like people drained of vitality - the other American way. This intervention at the level of symbolism drains the flory out of timeworn constellations of iconic masculinist narrative and character-types, and thereby interferes with the cultural works these fictional artifacts do.”

“As I found out during the introduction, and much to my complete amazement, this movie has been very influential for filmmakers loosely known as the Berlin School, such as Nicolas Wackerbarth and Angela Schanelec. I say complete amazement because I actually had felt that my films, much like the 35mm print that we screened, had sort of faded out from cinematic consciousness. The colors lacked the brilliant intensity of the original. The optical soundtrack, being scratched from multiple screenings, was less than great, and the overall sharpness was diminished.”

“Diamonds are like glittering jewels that are under the earth; they’re like buried treasure. And Tinka’s character is like a queen of the underworld. (...) I think the notion of the female, the value of the “feminine”, if you will, in this country is so devalued, so held in contempt, that it’s like a buried treasure. Buried in the sense that no one has access to it. We as women don’t have access to it; men don’t have access to it because they objectify and degrade women.”

“She (Menkes, red.) quotes Angela Carter, who believes that women will be lulled by the propaganda of the romantic stereotypes until they have the courage to believe in the truth of their own experience. Menkes’ fiercely personal oeuvre is marked by visual experimentation and feminist critique, along with intimate exploration of her own psyche. ‘My struggle as a woman and artist is to allow myself to be who I am,’ Menkes said. That sounds easy, but it’s not: ‘A lot of women are struggling with the idea of themselves as subjects.’”

“What does it mean to be ‘other’? What is that really about? We don’t even know. We don’t have a clue. (...) I think in all my films I tried to get at it. In Queen of Diamonds, I’ve gotten at it the best in terms of abstracting that experience and presenting it in an unadulterated form. Which is another thing that freaks people out. It’s a presentation of an experience without translation, so there’s no telling about it. It just is it: the fragmentation, the cut-offness, the alienation, the beating the head against the wall. That whole middle section of Queen of Diamonds, it’s just unadulterated. Untranslated.”

“I think we have to talk about THAT: about the deep meaning and the shape/form, color/texture of what it means to be always, always, always #2. I wish I could see more honest work from women filmmakers - go ahead and put yourself on the line - what are you really going to lose? Well, you’re right; If you even ALLOW YOURSELF to FEEL what is really going on - and of course that’s the hardest part - you’ll either be fired or quit.”