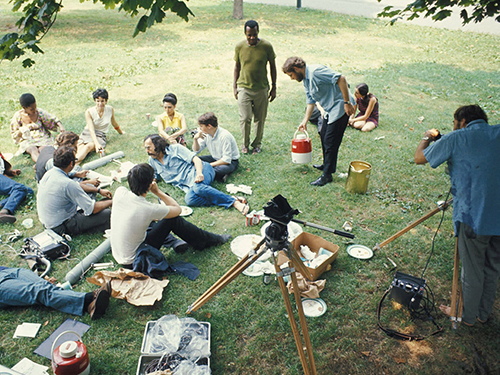 “Symbiopsychotaxiplasm is neither a documentary nor a traditional feature. At least I don’t feel that it is. It is more of a happening. Instead of being a form of conventional art it is apiece of abstract art. Abstract in the sense that it does not obey the language of convention. It obeys the mind, the heart, the intuition, the subconscious. These are the determinants, rather than the Aristotelian approach to drama - the traditional dramatic form of Sophocies or Ibsen or whomever. You’re going for - let’s call it divine action, another level of insight into the human condition, using cinema. The fact is that we could take this event‚ this scene, this screen test-and throw it into a community of actors and cinema technicians and no matter how it fell, it would be a film.

Before we knew it, we were dealing with some of the basic points of drama, which is conflict and development, progression, a rising conflict into some kind of crisis, climax and some resolution. It may not happen as we would like it, but some variant of that theme will occur. The problem for the filmmaker is to find what the variant is and how to put it together in the editing room with the materials you have.”

“Black independent film-maker Bill Greaves has played a significant if not always fully appreciated role in the creation of a new post-1968 era in U.S. documentary cinema – one that is characterized by greater cultural diversity among those making films. During the nineteen-fifties and early nineteen-sixties Greaves endured a protracted struggle to establish himself as a documentary filmmaker of artistic integrity. By the mid-nineteen-sixties he finally began to produce films on subjects of particular importance to African Americans. In 1968, while continuing to further develop his own still limited filmmaking opportunities, Greaves began to assist a new generation of young black documentarians through the initial stages of their professional careers – filmmakers such as Kent Garrett, Madeline Anderson, and St. Clair Bourne. Greaves was not only a harbinger of a new era of multicultural filmmaking but a pivotal figure in the history of African-American cinema.

Greaves, in addition to being an important historical force, has produced an impressive and surprisingly diverse body of work, both in approach and subject matter. This testifies, on one hand, to his inventiveness and broad range of interests and, on the other, to the numerous practical exigencies he has faced over several decades.”

“When Symbiopsychotaxiplasm: Take One surfaced in 1991, it was a double surprise. It surprised those who assumed they were familiar with the major independent and experimental films of the sixties, and it surprised those who believed they understood the career of William Greaves (1926 - 2014); firstly, as a stage and film actor and a drama teacher and, subsequently, as a director and producer of documentary films. Neither of these careers seemed to account for this singular metacinematic experiment. And yet, as fully as any film he has made, his self-described ‘study of the creative process in action’ combines his interest in acting and in actors with his need to document and interpret real events. Symbiopsychotaxiplasm, conceived as ‘take one’ of a series of ‘takes’, documents the shooting of a strange film in Central Park. ‘Various couples repeatedly rehearse a screen test in the afternoon sun under the indulgent eye of the director. The script is acrimonious yet somewhat clichéd, the actors tense and awkward. The crew is unnerved and wrong­-footed by the filmmaker, played by William Greaves himself, whose directing style is infuriating, inconclusive, vague and deliberately contradictory. At their wits’ end, they borrow a camera and film themselves debating the shoot in urgent, rambling, evening discussions. The frame splits in two. Greaves encourages his crew in their Palace Revolution; obstreperous tramps wander onto the non­-set to hijack the non­movie, sound levels repeatedly stutter and glitch; through it all glides the sound­track of Miles Davis’ In a Silent Way: serene, serious, enigmatic.’ (The Otolith Group)”3

“What if they made a revolution and nobody saw it? That’s what happened in 1968, when William Greaves filmed one of the most daring and original movies of the time... It’s one of the greatest movies about filmmaking ever made, and one that would have spoken to young independent filmmakers of the time. It’s a vision of filmmaking that didn’t get seen when it could have made a decisive difference for a new generation... The movie is no mere self-exploration or self-reflection but a vision of the times, a crucial work of late-sixties politics in action.”