PRINT
FILM
The Works and Days (of Tayoko Shiojiri in the Shiotani Basin)
,
,
480’ 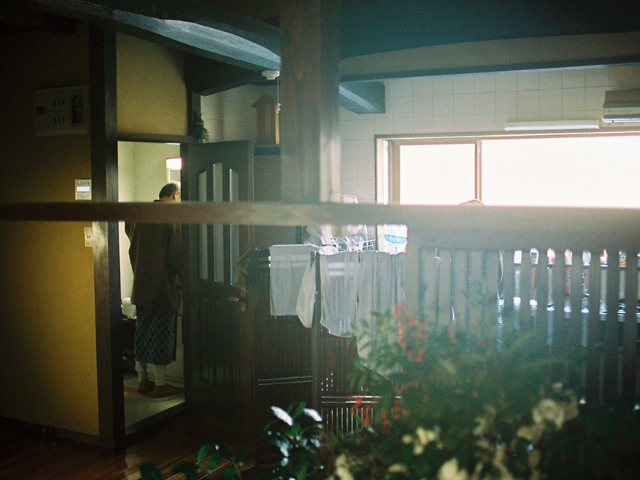 “The first rule in farming is that you are never to hope for an easy way. The land demands your effort.” The Works and Days (of Tayoko Shiojiri in the Shiotani Basin), the second dramatic feature from directors C.W. Winter & Anders Edström, is an eight-hour fiction shot for a total of twenty-seven weeks, over a period of fourteen months, in a village population forty-seven in the mountains of Kyoto Prefecture, Japan. It is a geographic look at the work and non-work of a farmer. A description, over five seasons, of a family, of a terrain, of a sound space, and of a passage of time. A georgic in five books.

“Jacques Rivette once wrote that a good film begins with something being wrong. In The Works and Days there is something wrong in almost every shot, something that makes us look more closely, more attentively, until we realize that it’s not the shot that is wrong but the way we normally look at things. Those images do not want anything from us; they ask everything of us. [...] In daily life, humanity has quite successfully and tragically domesticated the thickness of things, nature, and people. Cinema was quick to follow in this domestication. It’s a small miracle to discover a film that resists these modes of confined representation and reminds us of the roughness of things, their independence and inherent beauty: the dim light touching a somber window, the reflections of bodies in the water at dusk, the smell of tomatoes brought as gifts, a concert of frogs, a tired body leaning on a wall, a shadow moving behind a screen, a drunk story long forgotten and, always, the wind, the wind in the trees. The Works and Days proposes a way of perceiving that dares to become a way of living (and the other way round). To my mind, that is the most any film can be expected to do.”

“In a thousand variations of penumbra and darkness, The Works and Days is at once a filmed diary, a topographical survey, and the memory work of a village in the process of shrinking. Though all this says little of the hypnotic experience and poetry provided by this work, a film that is as much sonic as visual. Through a tight edit, never contemplative, this film, without programmed responses, sows in our minds a multitude of questions: how do we gaze at a landscape, what do we retain, what makes a story? The answer may lie in a tree whose leaves, filmed against the light of the sky, end up drawing a resting face. Only the imagination counts. And in front of The Works and the Days, we can dream.”

“The film’s title betrays geographic interests. Interests in a set of families who, for eleven generations, have settled and farmed this particular alluvial fan that spills down out of a ravine in the Tamba Mountains and into a river formed by the Kanbayashi Fault, the suture of the Miyafuku and Tamba geological zones. It’s a terrane and a landscape that leads one easily to thinking about Huttonian deep time or Braudelian longue durée. The film is a description not just of those who appear on-screen, but a set of memories–often ritualized–of those no longer there, a family spanning wars and eras and alternating periods of comfort and hardship. So we suppose there are something like strata of memory throughout the film. The events and non-events of the present; of structures razed or left to neglect; stories of times past told amongst the actors on-screen; the georgic sense-memories of habit, passed down through generations, seen in their labor; and the memories, revealed by the film’s apparitions, of those who were there before. There is always more to a place. A map is not the territory, etc. [...] In some ways as well, the film is a love letter to cinemas. Of times spent in them, of memories built up in them. Of collective experiences had and communities made. A recognition that the film world has much better chairs and much better speakers than does the art world, for example. And a desire to take advantage of all these factors to make an extended experience. A film that can, for a day, be somehow lived in.”