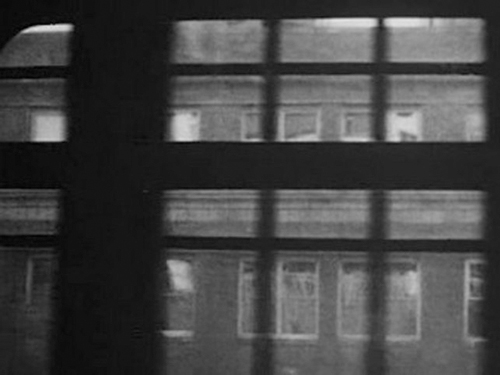 Kathy Geritz: The title of one of your films, Train of Thought, reminds us of your penchant for shooting from different means of transport: a bus (Wall Street), a train, a tram (Prague Winter), the metro (Public Domain), a car (Silk Ties). Could you explain that? Do you want thus to duplicate the energy of the city, the passages, the transitions? We like to talk about your films according to the category of “trains of thought”. For us that is the pace of your films. But it also might be something like “thoughts in a train”.

For practical reasons, a van is a great way to film people in New York because you are moving, but slowly, and there are generally lots of people around. You can get very close to them. Otherwise, I carry the camera in a bag and I pull it out. It’s always really stressful to pull the camera out and then start shooting. I was shooting around Jackson Heights, Queens. It’s very tough. People get angry with you. You get all sorts of reactions. You’ve got to deal with it. If you want to do it, you’ve got to do it. I carry the bag with the camera in the bag, then I take it out of the bag and then I put it back in the bag. The great thing about where I’m shooting in Jackson Heights is that the roar of the traffic and subways overhead covers the sound of the camera. People don’t hear the camera going so then I’m able to get close to people. [...]

Street life changed in the time I’ve been shooting New York but my approach to shooting it hasn’t changed as much as technology has changed. In a way, the pace of my films might be affected by the medium I work in: Films (rather than video). Because film costs something and requires a bit of effort, maybe it’s a more thoughtful or reflective medium than video. With video, you just shoot and shoot, and tape over what you don’t like. Film is precious, so it’s harder to be frivolous with it. You only press the button for what you really want so you usually don’t wind up with a lot of dead shots or go on and on with a single scene too long. Maybe the relative slowness of the process gives the images vitality. That would be ironic. It’s more labor-intensive and more costly, so you don’t linger on a lackluster image.

I’m very distressed about the fact that 16mm is being overshadowed by video. It’s no longer a money problem for me; I can make a film for four or five hundred dollars. Maybe a film costs more now, but I can afford to shoot film. I’ve set up my life so that I can do that because I have a job that pays enough so I can make films. It would never be for money reasons that I would switch to video. I don’t work with sound so my style of making a film is not very sophisticated and it is really cheap.