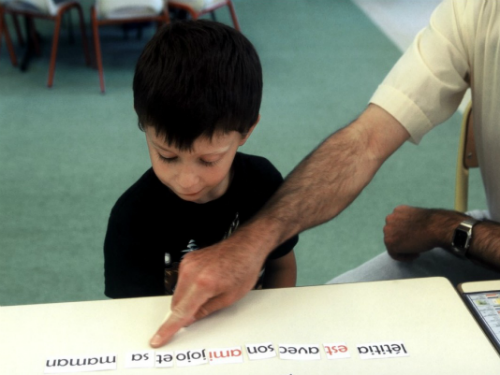 A documentary portrait of a one-room school in rural France, where the students (ranging in age from 4 to 11) are educated by a single dedicated teacher.

“I don’t want to steal images. I am not a thief. My camera is not a surveillance camera, it is more like... not surveillance, but bienveillance.”

“The outcome is a poetic meditation on the passage of time and the progress of a child’s education, framed by the changing seasons and filled with everyday laughter and dramas, from the theft of an eraser to a 4-year-old’s first encounter with a photocopier to the (temporary) loss of a tiny girl in a tall field of wheat during a spring picnic. ‘At its heart’, Mr Philibert observed, ‘the film speaks about how difficult it is to grow up.’”

Richard Falcon: A lot of documentaries today are shot on DV and/or shown on television. How important was it for you how the film would look on a big screen? For instance, there’s a very cinematic movement between the close-ups of the children’s faces and the shot of the countryside.

Nicolas Philibert: My culture is cinema. I detest television. Television is obscene in its transparency – it’s a place where people lay bare their lives for very little return. Cinema isn’t transparent – it uses elements like the grain, the depth of the shot, the play of light and shadow. Cinema is the art of ellipsis: the language is metaphorical and every film has its secrets and mysteries.

Mr Lopez describes teaching as a process that demands great patience and takes time but is very rewarding. Is this how you feel about documentary filmmaking?

The roles of the teacher and the documentary filmmaker both involve the transmission of knowledge and require patience and the ability to keep an appropriate distance from your subject. Documentary filmmaking demands an aesthetic and moral distance. So the shots of nature in the film are very important because they create a contrast between this small class and the rest of the world. We open with the snow, the whistling wind and the cows being herded; we thus recognize the school as a refuge from the violence of the world outside. The first shots you see of the school itself are the tortoises creeping across the floor: it’s a way of saying that the viewer needs to be patient as the film is going to take its time and will illuminate its subjects only gradually.