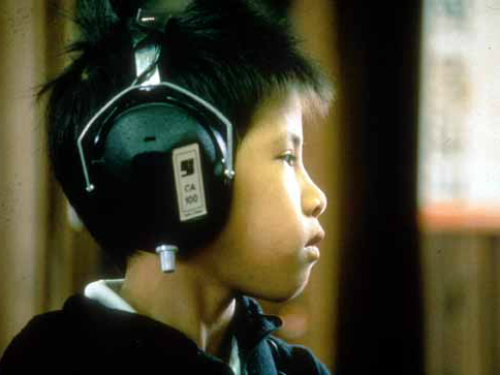 “The film implicitly reflects on three different kinds of language – the different languages spoken in movies, the so-called language of cinema, and Sign, specifically the language of the deaf. Different languages are suggested by the use of subtitles in the film to translate Sign as well as vocal speech. But then Jean-Claude Poulain – the most expressive purveyor of Sign in the film, who also teaches that language – explains that Sign is less of a universal language than we suppose, because it is articulated somewhat differently in each country. He adds, however, that it takes him only a few days to pick up Sign in another country, which finally suggests that it’s still more universal than spoken languages.

The relationships between Sign and cinema are obviously deep and complex; significantly, the film’s first Sign monologue reveals a mute subject’s lifelong fascination with movies and his early desire to become a film actor, until a director neighbour informed him that this was impossible. But this doesn’t mean that Sign and cinema are automatically interchangeable. The aim and achievement of Philibert’s film is to plunge us as completely as possible into the world of communication between deaf people, and in order to do this he’s had to rethink, to some extent, the language of cinema – the conventions of framing, editing, and even sound recording. In a fascinating article for the French film magazine Trafic (no. 8, automne 1993), Philibert has described in detail how conventional documentary filming methods proved inadequate for capturing the subtle interactions between deaf people. (For example, ‘Although sound operates in 360 degrees, in the realm of the deaf the voice-off does not exist: out of sight, communication is not possible; outside the frame, not even a hello.’) In the same article he explains why making a purely silent film would not have accurately represented the world of the deaf – which, ‘contrary to what is believed, is not pure silence. Confused, faraway murmurs, diffuse noises: even for the so-called ‘stone’ deaf, it is not nothingness.’ Philibert manipulates his own sound track at times in order to suggest some of that subjective experience – a technique that becomes especially apparent towards the end of the film – and some of the Sign monologues deal with certain aspects of the experience as well. (A mute born into a nearly all-deaf family describes the initial experience of using a hearing aid as extremely unpleasant: ‘The sound of chairs – it was awful.’)

I’m tempted to say that I haven’t seen such emotional, multifaceted physical expressiveness in so many people since the golden age of silent cinema; but alas, among contemporary moviegoers that no longer serves as much of a recommendation. So let me put it differently: if you want to see and hear people who will make you feel more alive, the likes of whom you won’t come close to finding in many current commercial releases, check out Nicolas Philibert’s In the Land of the Deaf.” 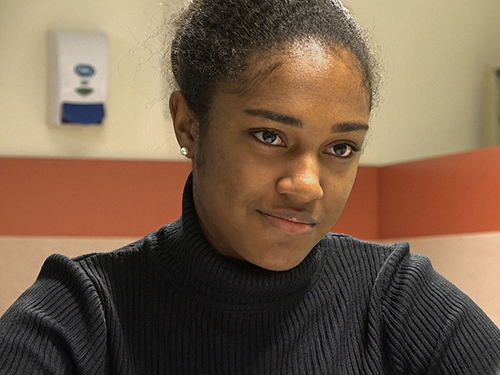