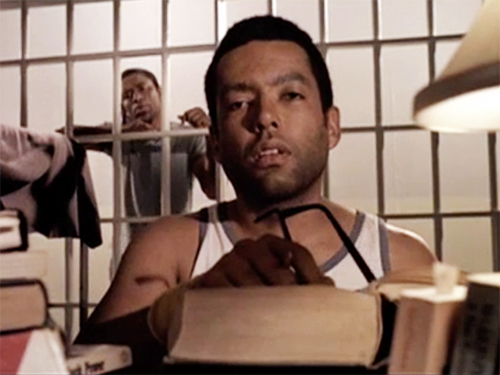 “This highly original existential black comedy charts the real-­life exploits of William Douglas Street Jr. (played with a great deal of charisma and wit by writer­-director Wendell B. Harris Jr.), a compulsive imposter whose improbable successes are spurred along by the fact that he’s black. From the late 70s to the mid­80s Street carried off a number of impersonations, presenting himself as a Time magazine reporter, a surgery intern (he performed 23 successful operations), a Caribbean exchange student at Yale, and a civil rights attorney; various other scams landed him in prison. Without wasting any time on facile psychologizing, Harris uses his subject as a means to explore the paradoxes of acting (some of Street’s real­-life victims play themselves) and the invisibility of blacks in the US; Street is also the source of some very funny comedy. In all, this disturbing yet compelling rogue’s progress calls to mind an 18th­-century picaresque novel.... Wendell B. Harris Jr. demonstrates probably the darkest sense of being black since Ralph Ellison’s Invisible Man!”

“Like its character, the film keeps on freewheeling without a horizon in sight, aggregating sketches, voice-over comments, language changes (Street is keen on French) and more or less extravagant disguises (beautiful scene in which he puts on a costume from Jean Cocteau’s Beauty and the Beast), all the while retaining a tone of acid mockery reinforced by the sickly arrogance of the black chameleon.”

“The epitome of black independent vision, Harris's film, which he wrote, directed, and stars in, was financed and made for around $1 million, largely through his efforts at persuading friends, professionals, and community members to invest in the project. Beyond the determined ingenuity of the production's ‘guerrilla financing,’ Chameleon Street's cinematic authority dwells in the unique, disturbing view that the film affords the spectator into an African American psyche and that psyche's calculated interactions with a surrounding, dominant white society. [...] All culminates in a dialectically shocking metaphor for the double consciousness, masked anger, and constant pretending that all blacks, to some degree, must deploy to live in a persistently racist society. Embellished by Harris's arty, avant-garde style and sardonic voiceover monologue, this is the unspoken and unspeakable truth that will forever keep Chameleon Street out of dominant cinema's mass entertainment markets.”