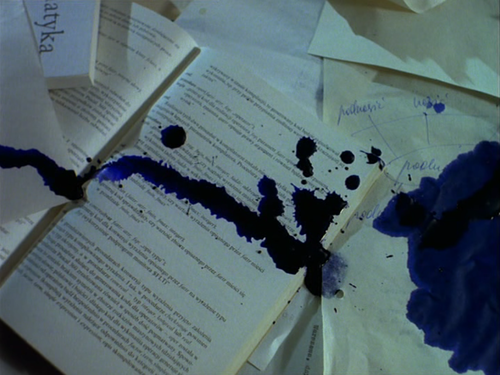 “One day I happened to bump into my co-scriptwriter in the street. It was cold. It was raining. I’d lost one of my gloves. ‘Someone should make a film about the Ten Commandments,’ Krzysztof Piesiewicz said to me. ‘You should do it.’ A terrible idea, of course.”

“Decalogue is an attempt to narrate ten stories about ten or twenty individuals who – caught in a struggle precisely because of these and not other circumstances which are fictitious but which could occur in every life – suddenly realise that they’re going round and round in circles, that they are not achieving what they want.”

“The best idea I had in Decalogue was that each of the ten films was made by a different lighting cameraman. I thought that these ten stories should be narrated in a slightly different way... Only one cameraman made two films; all the others were made by different lighting cameramen. The oldest cameraman must have been over sixty, and the youngest about twenty-eight – he’d just finished film school. So they came from different generations, had completely different experiences and approaches to the profession. Yet these films are, all in all, extremely similar visually, even though they are so different. In one the camera is handheld, in another a tripod is used. One uses a moving camera while another uses a stationary one. One uses one kind of light, another uses something different. Yet despite everything, the films are similar. It seems to me that this is proof, or an indication, of the fact that there exists something like the spirit of a screenplay, and whatever resources a cameraman uses, if he’s intelligent and talented, he will understand it, and this spirit will somehow get through to the film – however different the camerawork and lighting – and determine the essence of the film.”

“I am always reluctant to single out some particular feature of the work of a major filmmaker because it tends inevitably to simplify and reduce the work. But in this book of [the Decalogue] screenplays by Krzysztof Kieślowski and his co-author, Krzysztof Piesiewicz, it should not be out of place to observe that they have the very rare ability to dramatize their ideas rather than just talking about them. By making their points through the dramatic action of the story they gain the added power of allowing the audience to discover what's really going on rather than being told. They do this with such dazzling skill, you never see the ideas coming and don't realize until much later how profoundly they have reached your heart.”

“The first thing that strikes the eye of a viewer aware of the historical circumstances in which Decalogue – the series of ten one-hour TV films, arguably Kieślowski’s masterpiece – was shot, is the total absence of any reference to politics: although the series was shot in the most turbulent period of post-World War II Polish history (the state of emergency imposed by General Jaruzelski’s coup d'état in order to curb Solidarity), one cannot but admire Kieślowski’s heroic ascetism, his resistance to scoring easy points by spicing up the story with dissident thrills. Of course, it is not only legitimate, but also necessary, to inquire into the concrete social conditions within which Kieślowski accomplished the turn from socio-political concerns to more global ethico-religious ones.

[...] Kieślowski’s topic is ethics, not morality: what actually takes place in each of the instalments of his Decalogue is the shift from morality to ethics. The starting point is always a moral commandment, and it is through its very violation that the hero(ine) discovers the proper ethical dimension. Decalogue 10 is exemplary of this choice between ethics and morality which runs through Kieślowski’s entire opus: the two brothers opt for their dead father’s vocation (stamp-collecting) at the expense of their moral obligations (the elder brother not only abandons his family, but even sells his kidney, paying for his symbolic vocation with the proverbial pound of flesh).

[...] Kieślowski displays a breathtaking mastery in rendering drab, contingent, everyday reality: his films are full of the ominous intrusions of the extra-narrative, raw Real that can be (or not) read as a sign. When, in Decalogue 1, Paweł hurries to school, he sees a dead dog who has been run over by a car and is lying on the roadway, stiff, frozen, with its eyes wide open, yellow and glazed-over. Paweł stretches out his hand to touch the animal, feels its rough, erect fur, withdraws and goes on – a premonition of his own frozen state after his drowning?

[...] At the most radical level, one can render the Real of subjective experience only in the guise of a fiction. Towards the end of his documentary First Love (1974), in which the camera follows a young unmarried couple during the girl’s pregnancy, the father is shown holding the newly born baby in his hands and crying. Kieślowski reacted to the obscenity of such unwarranted probing into the other's intimacy by referring to the ‘fright of real tears’. His decision to pass from documentaries to fiction films was thus, at its most radical, an ethical one:

Kieślowski: ‘Not everything can be described. That’s the documentary’s great problem. It catches itself as if in its own trap. If I’m making a film about love, I can’t go into a bedroom if real people are making love there. That's probably why I changed to features. There's no problem there... I can even buy some glycerine, put some drops in her eyes and the actress will cry. I managed to photograph some real tears several times. It’s something completely different. But now I’ve got glycerine. I'm frightened of real tears. In fact, I don’t even know whether I’ve got the right to photograph them. At such times I feel like somebody who’s found himself in a realm which is, in fact, out of bounds. That’s the main reason why I escaped from documentaries.’”

“The films of Krysztof Kieślowski and Abbas Kiarostami frequently deal with characters who are confronted with moral dilemmas. One need only think of the complex and highly nuanced approach that Kieślowski adopts in relation to the Ten Commandments of the Decalogue. Similarly, films like Ten (2002) or Taste of Cherry (1997) demonstrate no lack of nerve on Kiarostami’s part in grappling with thorny moral dilemmas. Of course, in this respect, Kieślowski and Kiarostami are not all that different from many other directors whose films also tackle moral issues. But what sets them apart from other conventional filmmakers is the fact that Kieślowski’s and Kiarostami’s ethical concerns tend to go beyond merely exploring moral content. Their heightened ethical awareness requires them to turn their moral gaze as much toward themselves as toward the characters that populate their films. Their scrupulous self-analysis often takes on the form of a critical examination of their own personal investments in the cinematic process.”