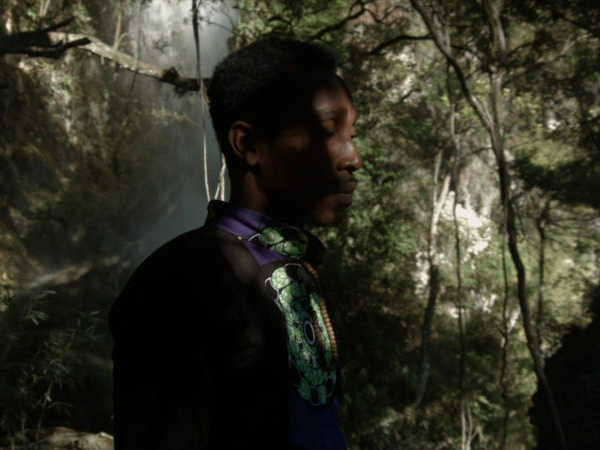 Ouvertures follows the ghost of Toussaint Louverture, a leader in the Haitian Revolution, as he travels from the prison cell in the Jura mountains where he spent his final days to present-day Haiti, where he encounters the Living and the Dead Ensemble as they attempt to “creolize” Monsieur Toussaint, Édouard Glissant’s 1961 play about his death.

“The narration takes place between two locations: France and Haiti – where a ghost story unfolds about the history of the Haitian revolution. In 1791, the slaves and the freed people of colour in the colony of Saint-Domingue rose up against the French. In the process they abolished slavery on the island and established the first free black state in the Americas with the Haitian constitution of 1804. Somewhat obscured and ignored throughout history, considered minor to the revolutions of the USA and France, the Haitian Revolution was perhaps the only revolution of the 18th and 19th centuries to truly live up to the Enlightenment ideals of the universal human rights of freedom and equality. The Revolution was initially led by a former slave who became an army general: François-Dominique Toussaint Louverture (20 May 1743 - 7 April 1803), also known as Toussaint L’Ouverture. He was arrested by Napoleon Bonaparte’s army in 1802 and brought to France, imprisoned in a medieval castle in the Jura Mountains where he died from pneumonia and malnutrition in April 1803. Ouvertures takes the viewer on a journey from the National Archives in France, to the frozen stratigraphic landscapes of the French Jura and into the heart of a baroque-like limestone cave, through rivers and waterfalls into the sea that connects these two worlds, eventually arriving in Haiti, where we come across a group of young actors rehearsing scenes from a Creole translation of the play Monsieur Toussaint by Édouard Glissant.”

On & For Production and Distribution1

“But among these literary opponents of slavery was one who, nine years before the fall of the Bastille, called boldly for a slave revolution with a passionate conviction that it was bound to come some day and relieve Africa and Africans. He was a priest, the Abbé Raynal, and he preached his revolutionary doctrine in the Philosophical and Political History of the Establishments and Commerce of the Europeans in the Two Indies. It was a book famous in its time and it came into the hands of the slave most fitted to make use of it, Toussaint L’Ouverture.”

“Toussaint, the most unhappy Man of Men!

Whether the rural Milk-maid by her Cow

Sing in thy hearing, or thou liest now

O miserable Chieftain! where and when

Wilt thou find patience? Yet die not; do thou

Wear rather in thy bonds a cheerful brow:

Live, and take comfort. Thou hast left behind

Powers that will work for thee; air, earth, and skies;

There’s not a breathing of the common wind

That will forget thee; thou hast great allies;

Thy friends are exultations, agonies,

And love, and Man’s unconquerable mind.”