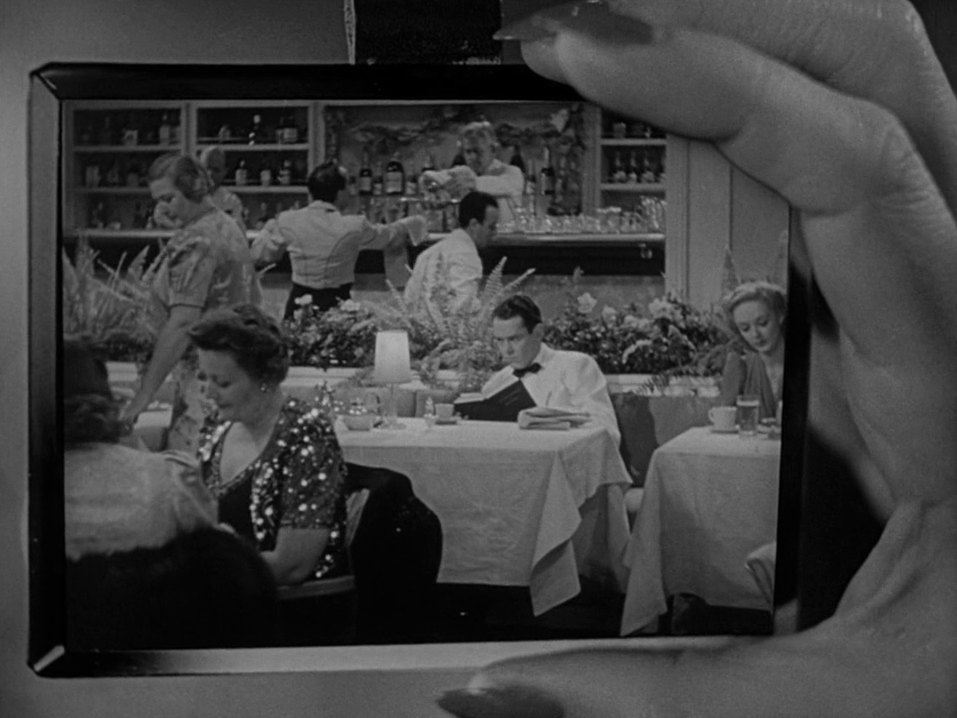 “Once long ago, as a teenage cinephile, I found myself sitting in front of Sturges’ The Lady Eve (1941). I had been told it was a masterpiece but, as is the case with every cinephile, I needed to be personally convinced of its greatness – so I waited for the epiphany to arrive. Early on in the film, a curious scene interrupted its clearly modern, knowing games with social and sexual roles. It was an intrusion of pure, unmediated corniness, or cornball as we say in English. Henry Fonda is in the process of declaring his love to Barbara Stanwyck, via an unctuous parable of children whose destiny it was to fall in love; meanwhile, in the mise en scène, waves washed behind the ship deck, and ‘Isn’t It Romantic?’ hummed on the sound track. I thought to myself: how trite and conventional, what a letdown, what a failure of nerve on Sturges’ part! I felt the film had betrayed me. This was a comedic masterpiece?

I was in for a severe but salutary lesson – and this was what ended up being my Sturges epiphany. At the other end of The Lady Eve, this corny scene gets re-played – but with a few major differences. They’re the same words, mouthed by the same actors; except that now Stanwyck is pretending to be someone else, and her motive is pure revenge. Sturges, too, is out for revenge – on me, the presumptuous viewer who actually believed the director could stoop to that earlier moment of schmaltz without a damn good reason. For the first scene was a set-up, and the pay-off is this: second time around, the words are ludicrous, and the scene keeps falling apart due to an obligingly over-romantic horse which keeps nuzzling into the love duet. Yes, I felt ashamed – to have doubted Preston Sturges for a single second! And – a more general lesson – to not have realised that the film was exercising its capacity to play a game on and with its audience, as part of its general game with clichés and stereotypes.

For Sturges, in the brief but glorious years covered from The Great McGinty and Christmas in July (both 1940) to Hail the Conquering Hero (1944) – similar to the period of high creativity enjoyed by John Hughes as writer-director-producer between Sixteen Candles (1984) and Ferris Bueller’s Day Off (1986) – there is a hitherto unprecedented emphasis, matched perhaps only in the drama of Citizen Kane (1941 – itself anticipated by Sturges’ script for The Power and the Glory, 1933), on ordinary life as its reflected and refracted in the mass media: photography, radio, newspapers, movies. The reflexive games in Sullivan’s Travels (1941) – a Hollywood film about the conventions and genres of Hollywood, and the ‘reality’ that is forever beyond their grasp – reach a dizzying peak in this regard. All of this feeds the central theme, the generating principle of Sturges’ work: in this cinema that is obsessed with showing how stories are spun and how images are constructed, the worst kind of person, the most narrow-minded and destructive in their actions, is the one who believes in the immediate, surface meaning of a mediated representation, who takes its appearance for the truth, and does not question further, or follow the fragile flash of true feeling and authentic personal identity that is always beyond the stereotyped image/story (The Lady Eve provides an almost textbook illustration of this scenario).”

“It is often said that these movies are ‘about nothing’ – and in a sense that is true, and it is part of their freedom. But it is also true that their combinations of formulas and stars not only have meanings of their own which we all recognize, but at their best these movies become metaphors for some of the most serious meanings of our lives. And the delight that a movie like The Lady Eve gives, a delight that goes beyond and deeper than mere pleasure or diversion, is inseparable, I think, from a recognition that its tensions of tone and feeling are very real tensions in us. That its brilliance is more than superficial, but a very real resolution of these tensions. That a movie like this is a witty and even moving counterpoint to our own very real experience not only of having to grow up, but of having to regret it too.”

“Sturges’ brilliant, successful yet always deeply self-sabotaging films suggest a warring blend of the things he picked up through respect for his solid stepfather, contact with his strange mother, and the intense need to enjoy himself and to succeed which came from 30 years of misery and failure. From his life with his mother he would seem to have gotten not only an abiding detestation for the beautiful per se, the noble emotion nobly expressed, but also his almost corybantic intelligence. From Solomon Sturges, on the other hand, Preston may have derived his exaggerated respect for plain success, which leaves him no patience towards artists of integrity who fail at the box office. The combination might explain his matchless skill in producing some of the most intoxicating bits of nihilism the screen has known, but always at the expense of a larger excellence.”

“Sturges’s free-wheeling dialogue is his most original contribution to films and accomplishes, among other things, the destruction of the common image of Americans as tight-lipped Hemingwayan creatures who converse in grating monosyllables and chopped sentences. Sturges tries to create the equally American image of a wrangle of conflicting, overemotional citizens who talk as though they were forever arguing or testifying before a small-town jury. They speak as if to a vast, intent audience rather than to each other, but the main thing is that they unburden themselves passionately and without difficulty – even during siesta moments on the front porch: ‘I’m perfectly calm. I’m as – as cool as ice, then I start to figure maybe they won’t take me and some cold sweat runs down the middle of my back and my head begins to buzz and everything in the middle of the room begins to swim – and I get black spots in front of my eyes and they say I’ve got high blood pressure. ...’ As the words sluice out of the actors’ mouths, the impression is that they teeter on the edge of a social, economic, or psychological cliff and that they are under some wild compulsion to set the record straight before plunging out of the picture. Their speech is common in language and phrasing, but Sturges makes it effervesce with trick words (‘whackos’ for ‘whack’), by pumping it full of outraged energy or inserting a daft idea like the Music Hall gag. All of this liberated talk turns a picture into a kind of open forum where everyone down to the cross-eyed bit player gets a chance to try out his oratorical ability. A nice word-festival, very democratic, totally unlike the tight, gagged-up speech that movies inherited from vaudeville, radio, and the hard-boiled novel.”

“Plays may be variously produced, and productions may or may not change in the course of a run, and may be revived; films can only be rerun or remade. You can think of the events on a screen equally as permanent and as evanescent. The poetry of the final appeals for forgiveness in The Lady Eve is accordingly a function of the way just this man and this woman half walk, half run down a path of gangways, catching themselves in an embrace on each landing, and how just this sequence of framings and attractions of the camera follow these bodies as they inflect themselves to a halt before a closed door, and just the way these voices mingle their breaths together. These moments are no more repeatable than a lifetime is. The uniqueness of the events of film is perhaps better thought of in comparison with jazz than with opera. Here the point of contact is that the tune is next to nothing: the performer – with just that temperament, that range, that attack, that line, that relation to the pulse of the rhythm – is next to everything. Of course a session can be recorded; that is the sense in which it can in principle be made permanent. But that session cannot be performed again, that is the sense in which it is evanescent.” 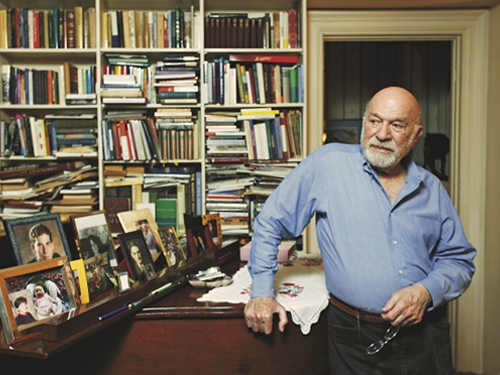 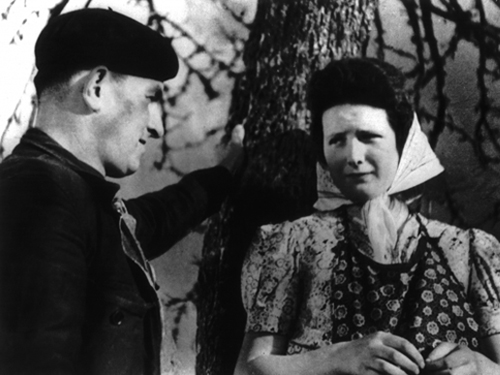 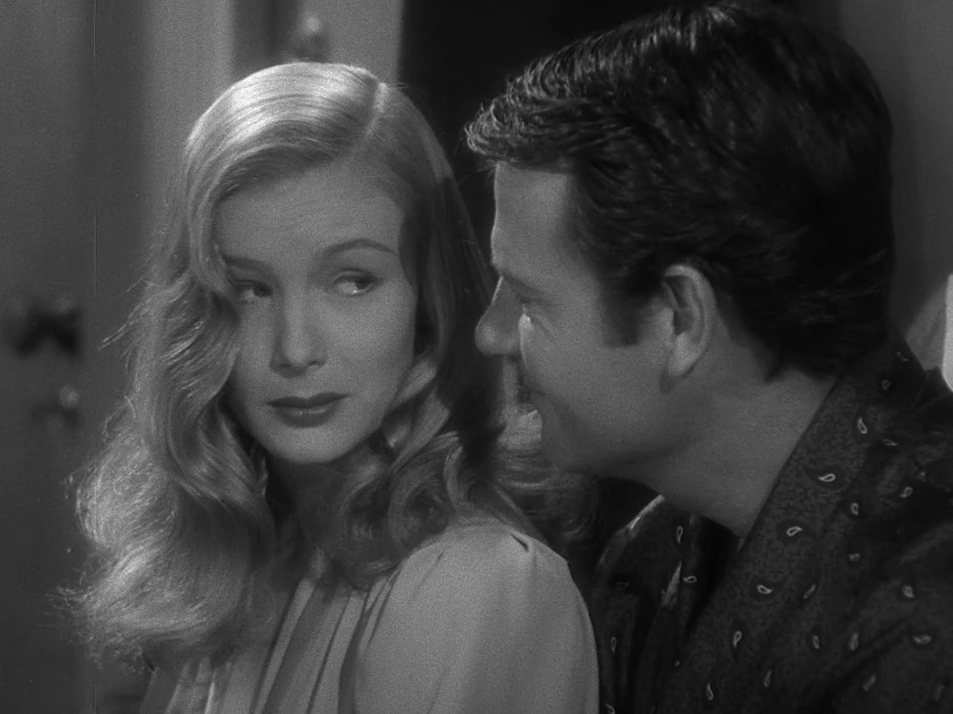