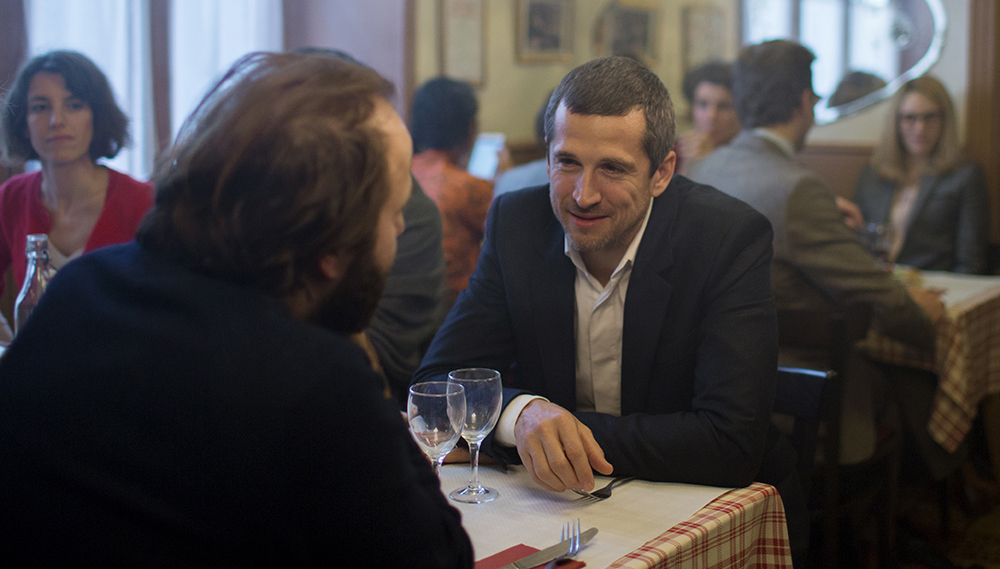 Why is Olivier Assayas’ Doubles Vies (2018) so fresh? And why does the film feel both contemporary and uncontemporary?

Assayas has made a comedy set in the French literary world. Alain is an editor. He refuses to publish his friend Léonard’s new novel. Alain is having an affair with Laure, an assistant guiding the publishing house through its digital transition. Selena is an actress. She’s Alain’s wife. She plays a police detective in a popular television show, a job that fills her both with shame and professional fatalism. There’s little other work for actresses today. Selena has been having an affair with Léonard for years. The latter, in his turn, is in a permanent relationship with Valérie, a communication consultant for a left-wing politician. Assayas did not turn this adultery and intellectualism into a weighty drama. Doubles vies is a comedy of lies and masquerades, confusion and ambiguity.

The film surprises by its modesty. Its mise-en-scène is remarkably classical. What happens within the frame is crucial. Assayas did not make images; he chose an angle, a point from which we observe what goes on between the characters. In Doubles vies the filmed space – and thus the scene itself – is a carefully prepared playing field for the actors. The intrigue exists in the actors. They shape the narrative, drive the plot. Everything happens while you’re watching the film, without the need to clarify the scenes’ thematic function in the story. Assayas’ dramaturgy is therefore very pragmatic, operating along the comic genre’s matching transparency. Both the camerawork and the editing enjoy a certain sparingness. The film is composed of long scenes with an even progression of time and space: a conjugal conversation in bed, an evening dinner among friends, a business lunch, breakfast in a Parisian café. It turns Doubles vies – if we stretch it – into boulevard theatre in disguise, a refined vaudeville.

As in every comedy the spectators know what they are dealing with. You are explicitly played, with a double relationality as a result. On the one hand, the spectators are aware of their position as spectators. Only through the accumulated knowledge do things get funny. On the other hand, the spectator is clearly the plaything of the course of events. Humour requires timing and rhythm, has an internal logic. In Doubles vies these manoeuvres are applied to the codes and conventions of a bourgeois class shaping its love relationships. The spectators recognize the lies and ambiguities these characters try to survive (each other) with. It is the same pretence they shape their own world with. When Selena asks her husband why he is unwilling to publish Léonard’s book, he invokes the latter’s problematic portrayal of women. It seems a deceitful move to signal his knowledge of the affair rather than an actual concern about the book’s content.

The humour in Doubles vies is not only meant to destroy pretence. Assayas is more interested in exploring the twists and turns of appearance. The characters also play for each other, taking on roles while remaining aware that the other performs a certain role as well. This bidding war of pretence and deceit is the game the spectator becomes embroiled in and where humour comes into existence. It is a pretence that can be unmasked as pretence but has to remain above all pretence. “We always lead double lives”, Assayas seems to indicate. Eventually, it turns out that Valérie has been aware of Léonard’s cheating for years. His autobiographically inspired works of fiction apparently left little to the imagination. When Valérie is later confronted with Selena, little seems afoot. The revelation causes little to no fuzz. The remarkable lightness with which the characters tolerate deceit is not only a consequence of the genre. The film manifests a certain maturity. These people are not cold, but not hysterical either. The pretence turns out to be both a blessing and a curse.[1] It’s an attitude that provides the film with a sense of calm. The calm of characters finding their respective roles, which they are forced to take, and the calm of spectators knowing their place. No speculating on the intentions of the maker, on what is not shown and thus remain a mystery. You surrender to what you see, you know the intrigue will follow, you don’t need to look for it. Doubles vies offers us an untimely, forgotten fascination for actors challenging and probing each other, turning inwards without ever clamming up. The acting testifies to a kind of fall-back, a “return” to craftsmanship. The actors do not beg for applause or are never forced by the director to act out a specific allegory. Assayas has created a world in which the characters are allowed to run off with their characters. From the very beginning of the film, the characters occupy their positions within the dynamics of the story. The stipulated relations then map out trajectories that give birth to the storytelling. Everything happens while you’re watching the film.

This specific form of self-consciousness distinguishes Doubles vies from other contemporary film. The mise-en-scène and the performance of the actors are classical, but this classicism is deliberate, a conscious choice on behalf of Assayas. This explicitness doubles the classical transparency and turns the movie into something more than an ordinary farce. In this sense, the film also looks at itself, with a subdued but smart eye. Due to the clear focus on the dramatic action, the film does not screen itself off but adopts a confident attitude. Assayas’ film is a comedy. Caricature and platitude are not avoided because of good taste, but are uncovered and explored. 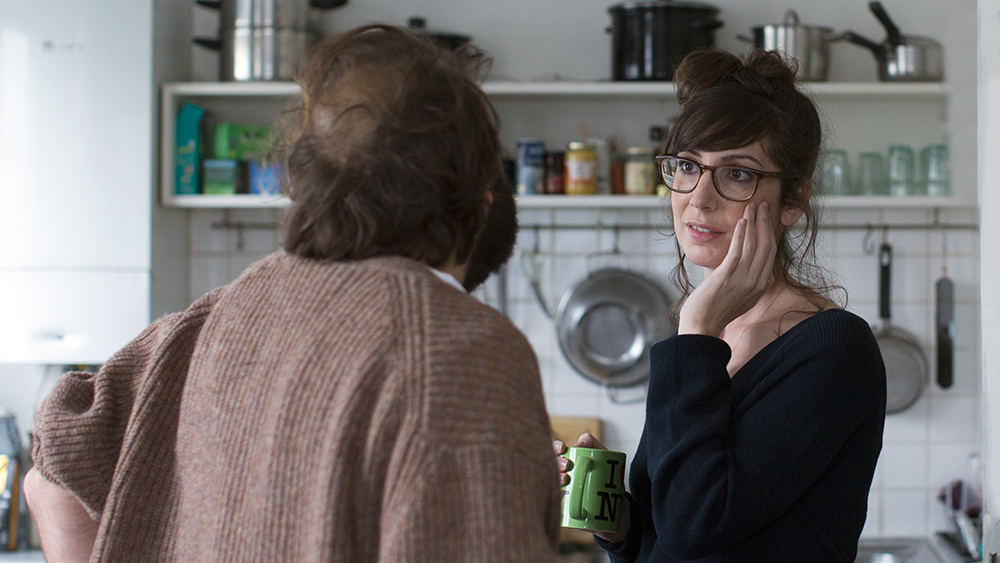 An old-fashioned French conversational film, Doubles vies contrasts sharply with contemporary films celebrated for their stylistic innovation. In Assayas’ film, determining the value of an image follows other criteria. In Doubles vies the image finds its place in a dramaturgic whole. On the other side is a cinema whose formal consciousness mainly has to reveal the originality of the director. The image constantly shows itself as a made image, signed by the filmmaker. Its false monumentality mainly strives for “iconolatry”, deriving its gravitas from the persistent reference to an ideational film history. Every image is composed to find its place in a made-up collective memory. Doubles vies resists this move. The film consciously counters any display of abstract creativity, its clear layout providing transparent simplicity. The spectators maintain an overview of the motives driving the dramatic action. Doubles vies probably looks too classical for “alternative”-film lovers. Yet its consistency feels fresher than many contemporary films. They wear themselves out in a quest for stylistic novelties, for the unassailable attraction of a contemporary-“looking” image. Assayas’ film is not built around an abundance of discoveries or curiosities – a dynamic that can go everywhere and nowhere – but sparingly focuses on a single narrative point. Doubles vies does not display creativity, it is creative. In today’s film landscape, that might make the film appear as old-fashioned. It almost seems untimely that a film is simply carried by a dramaturgical rhythm. In Doubles vies the story is not unravelled but practised by the actors.

With this subdued approach, Assayas seems to wonder what contemporary cinema is capable of. The storyline about the digitalization of the book trade serves as a mirror to reflect on the fate of the art of film itself.[2] Series seem to be taking over the role of cinema while our viewing experience is being scattered across all kinds of screens. The public’s contact with images has long ceased to take place in the sanctuary of the movie theatre. It has become individualised, fleeting and free-floating. To Assayas, this shift is not so much a moral question but rather a question of filmic writing’s chances of survival. Without nostalgia he insists on the specific powers and capacities of cinema, how they once operated and how they might still operate today, wherever they might be experienced. The cinematic gaze, Assayas observes, survives on smaller screens, but mostly as an inelegant object of desire. The world of Netflix never cut ties with cinema but constantly evokes it. On the one hand, one looks for salvation in new constructions and carriers. Cinema as a preferably large-screen, one-and-a-half-hour medium no longer meets viewers’ demands. The contemporary spectator watches by means of other forms and narrative styles. On the other hand, cinema remains a point of reference. Series look back on the heyday of cinema with objectified nostalgia. The list of crime series invoking film noir tropes is endless. A series is cinematic but doesn’t want to be cinema at all. Cinema becomes an adjective, an attribute. A fraught relation, to say the least. The difficulty is not the factual move to other screens but the half-hearted embrace of the new. The new form advertises its own novelty but refuses to turn it into a full-fledged writing, to fully explore its newfound reality as a medium. It mainly signals its own enclosure and thus isolation, with no new content to be found behind the fence. These are the questions proliferating behind the scenes of Doubles vies: what is the democratization of the sign and the image capable of, what are its promises and pitfalls? Because that’s what the opposition thrives on: on the other side, on new screens, new stories live, no longer suitable for the big screen. There is a battle raging around the recognition of an institution. The question which Alain asks himself as a publisher is not whether digitalisation can be avoided but how literature will survive within it, in whatever form. For Assayas, it’s not a medium crisis – the digital is a reality – but rather a cultural turning point. Can we still give “form”, including in a world in which new forms are constantly being thrown at us?

Perhaps Doubles vies’ untimeliness makes it a better film than it really is. But its sparing filmic intentions and its confidence in the effectivity of the actors’ performance and aesthetics reveal generosity. That is plenty for today. 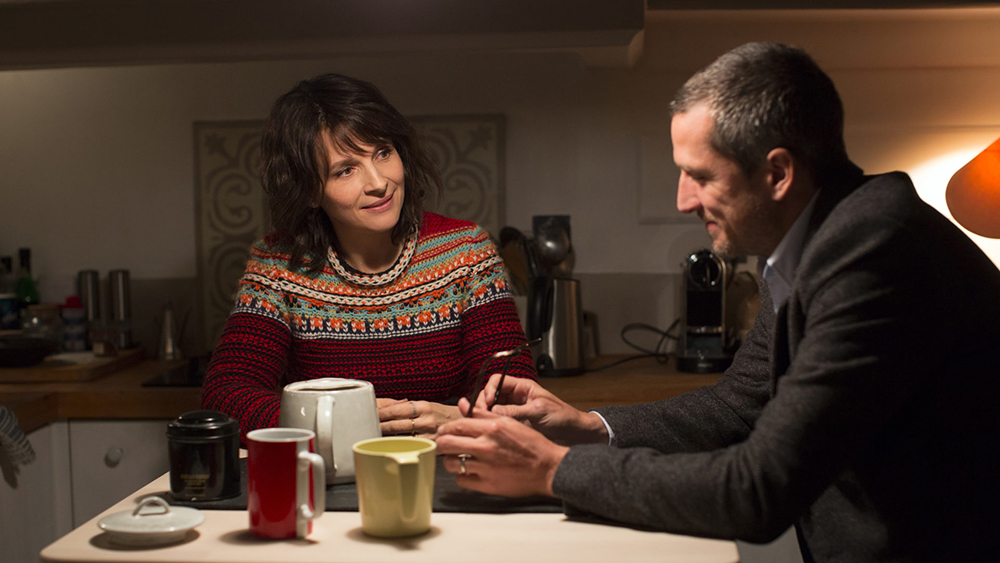 This text is published in the context of the State of Cinema 2020 / Olivier Assayas, Friday 26 June 2020 at 20:00 on Sabzian. More information about the evening can be found here. 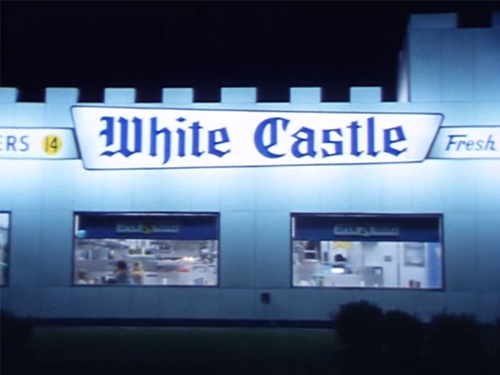 The juxtaposition of images shows a spiritual coherence to which we as viewers must work towards. In De poes [The Cat] (1968) van der Keuken articulates it thus: “The film could be a means for change. To this end it must affect the fixed patterns of expectation. To this end it must create a dynamic balance of the forms in which our reality can be described. Art could be a means by which to set man free. A school for seeing the self and the other more clearly.”