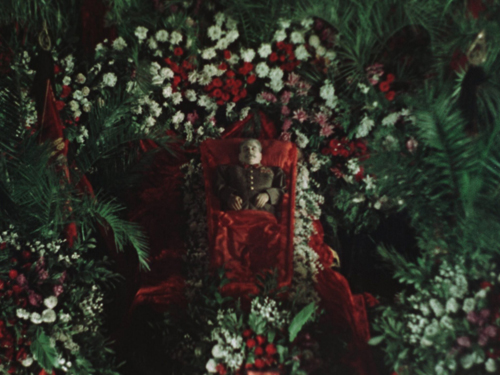 Unique, mostly unseen before, archive footage from March 1953, presents the funeral of Joseph Stalin as the culmination of the dictator’s personality cult. The news of Stalin’s death on March 5, 1953, shocked the entire Soviet Union. The burial ceremony was attended by tens of thousands of mourners. We observe every stage of the funeral spectacle, described by Pravda newspaper as “the Great Farewell”, and receive an unprecedented access to the dramatic and absurd experience of life and death under Stalin’s reign. The film addresses the issue of Stalin’s personality cult as a form of terror-induced delusion.

“In March of 1953, Moscow, and the rest of the Soviet Union, fell under a spell. On March 5th, a sombre male voice on the radio, heard on loudspeakers mounted in public spaces throughout the U.S.S.R., announced that the great leader Joseph Stalin had died. A bizarrely detailed enumeration of the symptoms that had led to his death was provided. A period of mass mourning commenced. Classical music, the funereal interspersed with the more uplifting, poured from the loudspeakers. Thousands of people from Moscow and elsewhere flooded into the center of the capital to pay their respects to the generalissimus, who lay in state in the Hall of Columns in the House of the Unions. Wreaths, flowers, and state leaders from the inner and outer empires flew in. At intervals, the sombre voice interrupted the sombre music to give an exhaustive description of the endless procession of mourners.”

“For the most part, sound complements or supports the images in State Funeral, such that (historical-technological impossibilities aside) you could mistake the fabricated sound cues for real ones. Thereʼs a hush that presides over the film, commensurate with images of mass performances of mourning. Yet there are choices that, in the context of a minimalist soundscape, function as directives to the eyes. The sound of a man coughing nudges us to notice the figure lifting hand to mouth within the frame. The sound of a woman crying guides us to a distraught face, watery eyes. Loznitsaʼs most overt interventions come in the form of archival audio recordings of honorific speeches commemorating Stalinʼs magnificence, presented as if they were playing over loudspeakers, which makes them ingratiate like near-subliminal benedictions.

Or rather, the sound treatment implies theyʼre playing over loudspeakers, thanks to a tinny, echoey mix that situates the broadcast within the reality of the scene. These recordings may have been commonly broadcast in that manner, but here theyʼre audial inserts: an effect, and a meaningful one. Loznitsa is coupling spoken-word lionizations of Stalin with images of a populace that had been terrorized and subjugated by him. The spectacle of thousands upon thousands of these comrades trudging through the cold to mourn their tormentor plays not as irony but as unspoken, unacknowledged perversity. Everyone in and everything about State Funeral is straight-faced. Itʼs in the quiet that a critique can be heard—in the things not said, the exhales of relief we might imagine mixing with the sobs of mourning, the dispassionate officiousness with which the ceremonies, and, finally in the last reel, synced eulogies from Stalinʼs colleagues play out.”

“One of the subtle authorial strokes in State Funeral is the inclusion of “Lullaby” by Matvei Blanter as the soundtrackʼs closing number. This moving piece is based on a poem by Mikhail Isakovsky, and it is widely known in Russia, but few have heard it in its original version, which features the following lines: “He will give you strength, Stalinʼs arm will show you the way…” It is impossible not to recall Dziga Vertovʼs frightening masterpiece, Lullaby, which was filmed in the fateful year of 1937: There, innumerable cradles are rocked, of course, by the hand of comrade Stalin, “the best friend of youth” (an inscription from one of the funeral wreaths in the film). Censors deemed the image of the sole “father of the nation” embracing the mother and nursing the child to be too sentimental, and Vertovʼs film was, at least de facto, banned from the screen. Loznitsa hints that in the moment of Stalinʼs death there occurred a wonderful transformation. From the symbolic father-god he turns into the “little sparrow,” the “little son,” the “dear small bell” from that lullaby.” 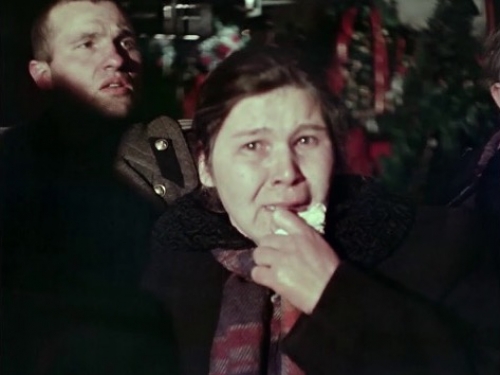