Assia Djebar was the pseudonym of Fatma-Zohra Imalhayène (1936-2015), an Algerian writer and filmmaker and one of the most influential voices in Algerian film and literature. She was the first Algerian woman to attend the École normale supérieure de jeunes filles outside Paris. During the Algerian War of Independence (1954-1962), she worked with Frantz Fanon for the newspaper El moudjahid, conducting interviews with Algerian refugees in Tunisia and Morocco, before going on to teach history in Rabat and later in Algiers. She wrote four novels at an early age before turning to cinema. Her debut film La nouba des femmes du Mont Chenoua (1977) offered her a way to approach the world of the women in Algeria and their oral history, telling the story of a woman who returns to the town of her childhood fifteen years after the violent War of Independence. In 1980, she resumed her career as a writer with Women of Algiers in Their Apartment, a collection of stories expressing Algeria’s collective memory through polyphonic narratives by female voices. Her final film, La Zerda ou les chants de l’oubli (1982) weaves an alternative vision of the history of the Maghreb from archival footage shot by the colonizer. 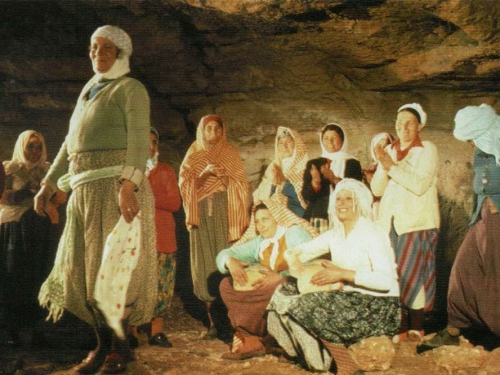 Tonight would have been the opening night of the Courtisane Festival in Ghent. Due to the COVID virus, the organizers of the festival were forced to cancel entirely, including the first part of the Out of the Shadows programme. On the occasion of this programme, Courtisane, Sabzian and KASK School of Arts joined efforts to compile an accompanying publication, focussing on the work of five Arab female film directors: Atteyat Al-Abnoudy, Selma Baccar, Assia Djebar, Jocelyne Saab and Heiny Srour. As the actual release is unclear at the moment, Sabzian publishes a first text from the publication, by the Algerian filmmaker and writer Assia Djebar (1936-2015). “For me, cinema is neither a “job” – in the sense of a career – nor a “vocation” – in the sense of a calling. What is it, then, for me, having made my first film shortly after the age of forty, then a second one shortly after the age of forty-five?”